The ideal project for me is an RPG single-player project. I insist on working with a version control system! I must note I mostly prefer Perforce. Offers will be negotiated before start. I am explicitly NOT looking for architectural visualisations, VR/Meta, NFT.

Senior Gameplay / Engine Tool Developer at a Major AAA developer / publisher
At the moment of writing this is a confidential project. My responsibilities covered UI for major in-game systems including gameplay logic integration; data driven automation tools inside of the Unreal Engine.

Senior Gameplay Programmer - Arcane Ascent - Rayscape Games
During my time at Rayscape Games I took the role of a senior gameplay programmer for the the project “Arcane Ascent” where my responsibilities included gameplay puzzle elements implementation (Blueprint, C++); interactions; effects implementation (dynamic materials, shaders, C++); making sure designers can easily use the functionality at hand and overall making sure all interactions play together in a nice manner. Communicating and synchronizing work with fellow team members was a daily routine. I had the pleasure to work with a senior team that came from Epic, Sony, Tencent and more who participated in the making of franchises such as Street Fighter and Tropico. Time manipulation gameplay and tools
I have been implementing time manupulative gameplay and tools for a client. It was a C++centric project that included Editor Custmization conducted with Slate, Detail Customization and various helper debug objects. Gameplay programming was also included. The goal was to provide the designer with a system that has a design friendly functionality for narrative-driven gameplay and simulation in editor-time and one that was also usable and easily debuggable. The functionality did not make to production as the client decided to pursue other ways into development. These two videos show the functionality with some explanation: 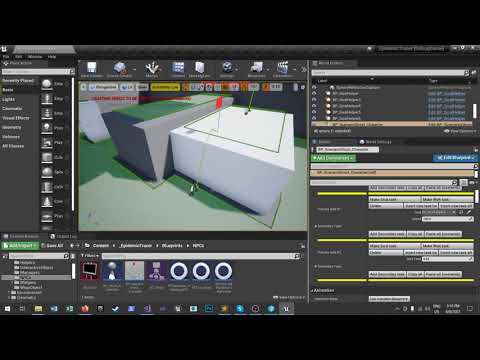 Dialogue System
During my spare time I developed this Dialogue system. It is meant for a single-player scenario and supports the creation of complex inter-character dialogues. The system can be extended quite easily to support other inter-system interactions. The source is open and can be found here: 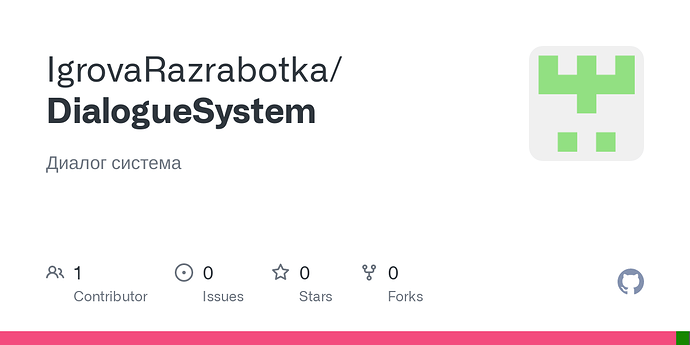 Диалог система. Contribute to IgrovaRazrabotka/DialogueSystem development by creating an account on GitHub. Menu System
During my spare time I developed this Menu framework that can be used as a base to any game (with some adjustments of course). The system complies to the “State” design pattern which is quite simple but powerful. The system is very easily extensible - it has a main menu in a separate scene, the in-game menu in a separate scene, there are standard options like loading, continuing from most recent saved game and starting a new game - all implemented to work with save files (the save game option is not implemented by design). Character screen, quest log, credit screen, settings menu also exist to finish off the feel. The menu system creates an .ini file on its own and whenever a change is made to the settings or if the contents of the file is incorrect - settings are also applied upon change from the menu. The source is open and can be found here: 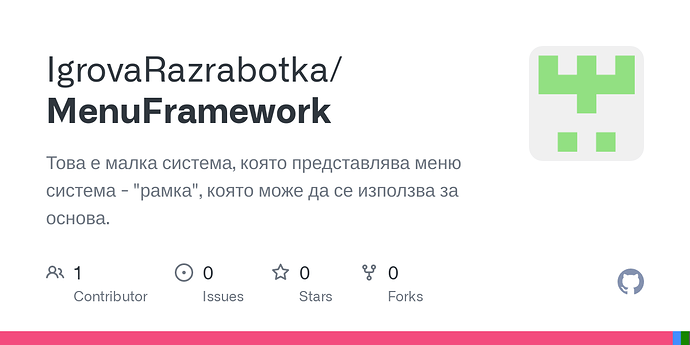 7 Bones and 7 Stones - The Ritual (game)
I was tasked with the multi-player steam implementation / synchronisation of this awesome project as well as with gameplay, UI, save system and some visual effects / FX implementations. It was also my responsibility to work on the back-end facilitating software of the game where I had to do C++ programming.The game project itself is Blueprints only and is currently in a “closed alpha” state and is publicly playable. Find out more information about the game here at its Steam page: Screenshot 1 - A Vampire in motion flying over a village amidst a forest (up-to-date development build): 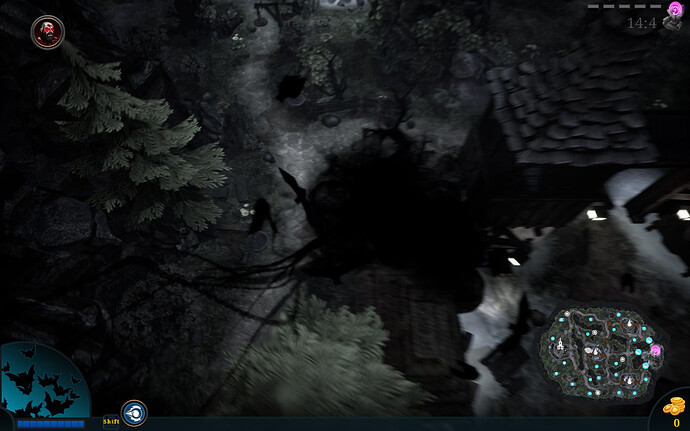 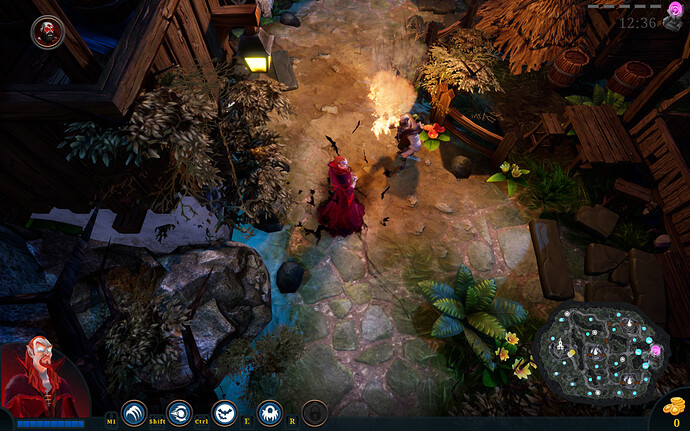 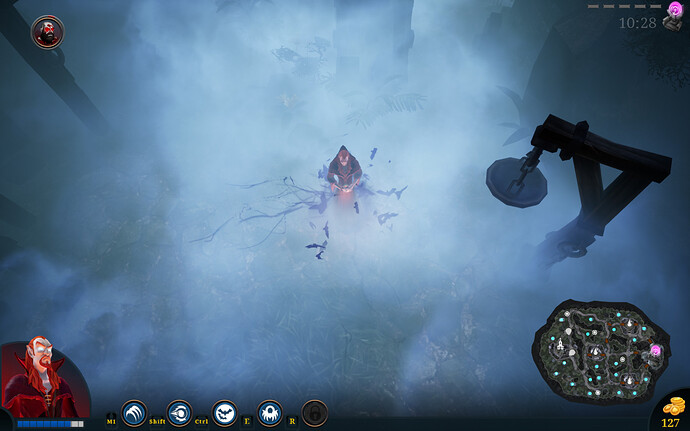 Turret
The implementation of this turret includes Behavior Trees (AI), blueprint scripting and some animation blueprinting. Inventory System (Unreal Engine)
This is an inventory system made in Unreal Engine 4 and entirely via C++. There is some procedural UI generation. The inventory system is component based and supports picking, dropping, moving and using items. It is designed for a single-player game use-case. The source code is open and can be found here: 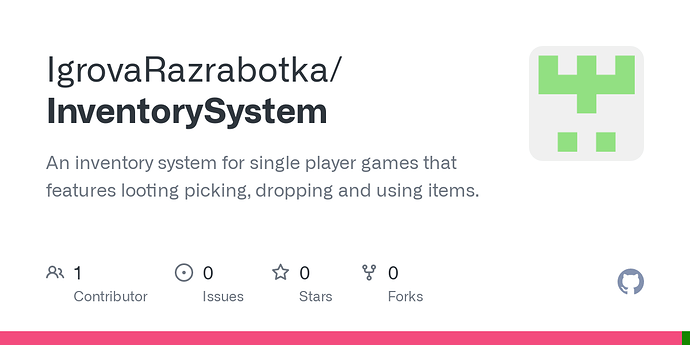 I was team developing the game called “Desert Escape”, which is a first-person shooter coiled in a twisted single player scenario. I solo-developing Journey Box . The game is a fantasy, roguelike, role-playing, dungeon and world crawler game the main motive of which is the sole process of adventuring**. I would like to endorse Kris to any team looking for an experienced committed C++ / Blueprint Programmer who has an endless ability and impeccable time management skills. Kris has recently been doing some work for me (Video #1 and Video #2 in the original post) where he has proven to be one of the most knowledgeable developers and overall an excellent team player.

If you are an indie team with minimal funding, I recommend getting in touch with Kris as I am confident that you will find his hourly-rate more than fair when considering the required time frame and overall quality of work.

For any additional questions surrounding Kris and his work, feel free to send me a private message or ask me on this post and I will get back to you!

Hello! My name is Vladimir Teneslav and I have worked with Kris on 7 Bones and 7 Stones for several months. I want to start off by saying he is extremely humble, so under all that modesty there’s a lot of knowledge and dedication. In fact, when I hired Kris he even acknowledged that he will have to study a lot for my project but I never once felt that he was stuck on an issue. For me, it felt like he already knew all the answers.

He has a very good and strict work ethic, so everything he does he does it in an organized fashion. He doesn’t compromise quality and really loves doing things in the right manner. I was also surprised to see how well he communicated and even raised awareness on critical issues on his own, regarding tangential issues to his own task. This was important to me because it revealed that he was really focused on the project and understood what was right for the code and the future of the game.

Kris was really a blessing that took the game to the next level. I am really hoping we could work again in the future. Kris is worth everything he asks and more and should be considered as a core team member for anyone looking for talent, not only indie games.

Wish you the best Kris, was a pleasure working with you! If anyone has questions about our time working together feel free to send me a private message.

I am now free and looking for work. Feel free to contact me.

sent you msg in skype, no answer till now

Hi. Couldn’t find your message. You can write me here.

Do You work in VR? I need some work done.

Hello @kriskirov, would you be interested in working with Epoch Games?

We have a couple Unreal Engine Developer positions open at this time.

I am available for work. Contact me in Discord at “Крис Киров#8502”

Sent you a discord friendship, I’m interested. I’m working on a Horror/JRPG à la Vagrant Story/Resonnance of Fate/SUPERHOT. All in Paper 2D (I do all the assets myself from audio to 2D sprites), the scenario plot and battle mechanics are already written everything on my discord, and got new ideas today while in the bus to add some spice in all of it. Feel free to add me.

Latest test video of my game.

Looking for work: Contact me at ‘Крис Киров#8502’ in Discord. Do not write in Skype or E-mail, nor here in the forum by a private message, I do not chock those anymore.

Hi, look for a friend request please from atacms#6986 on Discord.

I am looking for a c++ programmer with experience in Unreal and BP to help me set up gameplay mechanics and unit classes in an action/strategy game in Ue5, involving a modern/near future global strategy game.

I am looking for work. Please feel free to contact me on discord at: "Крис Киров

I am looking for work. Please, contact me on discord at: “Крис Киров#8502”

Are you looking for Revenue Share Work? We’re Developing a FPS MMO.

Please, feel free to contact me on business at discord: “Крис Киров#8502”