Building a turn-based battle system from the ground up. Need help knowing where to start.

First off, sincere apologies if this isn’t the right sub for this, I’m new here.

Hi y’all. I’m Zjez. I’ve been trying to make a turn-based RPG for years now, and I figured now was as good a time as ever to get off my lazy behind and actually start developing something, lest it never actually get done. For the last year, I’ve been learning UE4 basics both in school and through various online resources, and I feel like I finally have a decent-enough rudimentary understanding of at least the basics behind blueprints and working with the editor to start work on my project in earnest, and learn the rest of what I need to as I go along. I decided a good starting point would be to first design the turn-based battle system that the rest of the game is going to revolve around. But my searches online for any indication of how I might go about doing this have come up short, and I’m at something of a loss at the moment. I wouldn’t even know where to begin. And so I was hoping some lovely kind soul here would be able to point me in the right direction.

The final version of the battle system would, of course, be relatively complex, but for a start I figure it’d be best to simply get the most basic of functionality up and running and then go from there. I’m starting from the Third Person starter preset, straight out of the box. My goals at the current moment are as follows:

-To create a turn based battle system with two sides. The player should be able to transition to the battle mode from the default third person mode after being called by some kind of event.
-Each side should have four characters, who all get one action per turn. The action order is determined by a Speed variable each of these characters would have.
-When it is their turn to act, a character is able to Attack, Defend, or use a Skill that they have learned.
-AI Characters choose their action and target randomly from an available list. The player-controlled characters select their action from a menu/submenu and then selects the target.
-Once all characters have had their action, the next round occurs and the turn order is recalculated.
-Once all characters on one side are defeated, the battle ends and the game transitions back to the default third person gamemode.

So I know what I want to do, but have no clue how I would actually go about executing this. Any kind of direction or help would be largely appreciated.

There’s this Link] free turn-based RPG template that you can download and take a look at. 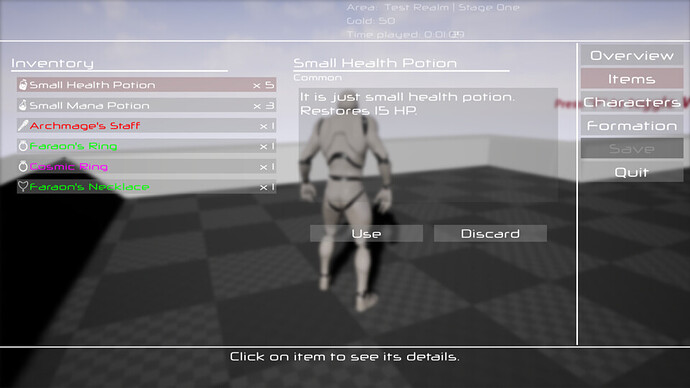 I also just found these tutorials on YouTube Link] Link] Link], I’m not sure how useful they are, but considering the dearth of turn-based RPG tutorials online, they’re probably worth checking out.

I hope all of this stuff will be able to help you out in your endeavor.

EDIT: I added a link to a third video from the same channel as the other two videos above.