I am experimenting troubles when trying to package my game (with Blueprints). It failed saying it can’t cast an object to Actor. (see the attached [log Error][1]).

It is a ChildActorComponent, which I “cast” to actor via “Get Child Actor”, and then cast the result as its class.
I do this in the Construction Script (see image).

I never tried to package the game before, but I am doing this kind of thing for some month now in other classes, and I never experiment any trouble running the game within the Editor.

Does someone know how to fix things up ?

You can’t cast ChildActorComponent to Actor. It would fail.

Hi there, I was hoping someone could explain or point me to an explanation of ‘casting’. I’ve only found these docs so far: From what I gather, you’d cast on to another object to get control of it. Is that right? What’s the real power behind this...

Thanks for your quick answer, but I am not sure you understand what I said or you looked at the linked image. I am pretty aware of ChildActorComponent not being an Actor.

Then, you can take this Actor and cast it to whatever it really is.

The Blueprint I linked is fully functional. As I said, it works for month within the Editor. So I am not sure your answer and links will help me here, as it is not a “compilation” problem, but really the packaging step which failed.

Maybe I am wrong and don’t understand what you wanted to point me out ?

Sorry.
It was my misunderstanding. Seems it was a bug with ChildActorComponent. Probably it’s related:

I’ve got a nasty crash that’s popped up three days in a row now. From the Crash Context file: Fatal error: [File:D:\Build\++UE4+Release-4.14+Compile\Sync\Engine\Source\Runtime\CoreUObject\Private\Templates\Casts.cpp] [Line: 11] &nl;Cast of...

Also You may try to copy a variable or move the asset. 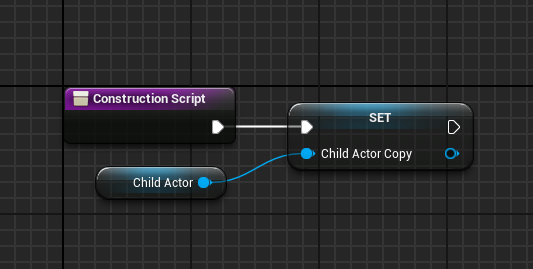 I also misused the “cast” word, hoping I was clear enough, but it seems I wasn’t, my bad.

So yeah, I guess it is related as I also experimented the crash discussed in your link. I worked this around by avoiding casts, I don’t remember exactly how, but to make it short I think the solution was the kind of “dirty but it works”.

I will try to find a work around here too, even though I don’t really know how …

I tried to make a copy as you suggested, then reuse the output of the “SET Child Actor Copy” node in the cast, but I have exactly the same error.

Just to laugh a bit with real Casting this time, going through the log output I also found that I have a Warning saying “this class B does not herit from class A, so the cast will always fail” … While my class B DOES herit from class A, and the cast DOES work … (well in this particular case I don’t care because I only use the “Cast Failed” output as I want to avoid this class, but still)

I’ll try to keep this subject updated if I found any way to fix this. Otherwise they said in your link that this bug would be fixed in the final 4.15 version so … Maybe I can just wait.
Sadly I would like to have it for this weekend to package the game for an event. Seems it will be run in the Editor if I can’t find a workaround before Friday.

Just for you to know, I can package my game using the UE 4.15 Preview version.

I just can’t manage to select which map I want, but this is another problem …