Description I added a capsule trace and enabled Draw Debug. That got me some red and green spheres, but upon moving the blue print actor in the level it kept drawing more spheres. Disconnecting/deleting
the trace did not remove the spheres from the viewport. I had to restart the editor to get rid of them. Likewise with line traces.
Also, after disabling Draw Debug, it often still continues to draw debug lines anyhow.

Repro Add a trace to BP, enable debug, place in level, move it around some. (I’ve been using user construction for it). 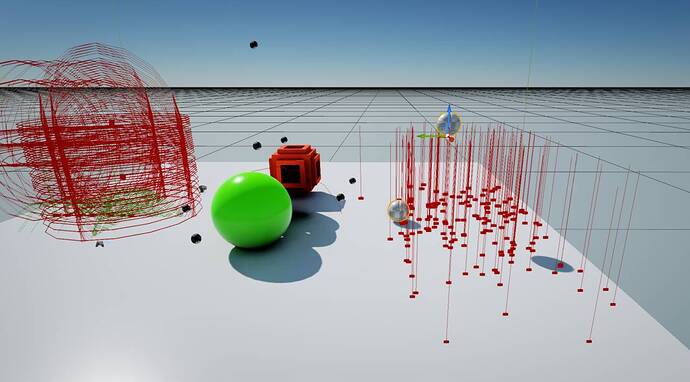 Results Get spammed with ever lasting debug lines

Expected Some way of getting rid of the lines/time limit.

I am attempting to reproduce this issue, but having some difficulties. Could you please show me a screenshot of the blueprint’s script? This will help greatly.

We have a repro and are looking into it! Thanks for the report.

Any news? I can still do this in 4.11 preview 7. I have a trace in the consturct with debug on persistent, so of course it won’t go away, but there should be a way to make them go away since they can get out of hand (move the actor around and I have a ton of red and green lines everywhere) and the only way I know how to remove them is to change the map.

Now you’re probably going to say “well then don’t put it on persistent” but I do want to see them… and putting it on For Duration may not be enough time to look at them all and do what I need to do.

You can use ‘flushpersistentdebuglines’ in console to clear them

That works in the console (in 4.18) but not if you “exec console command” in a blueprint for some reason.