The problem that I am trying to solve is that I cannot find a way to control the number of decimals a float has. I am outputing float values to my HUD as part of the gameplay, but I want to restrict those to 14.7 for example and no longer. There doesn’t seem any BP function that allows for that.

So alternatively I then figured out if I do the following I should get what I want:

Also another thing I tried which also did not work/not supported:

Thanks for your report! We agree that having some control over level of precision for a float is something that could be useful in some scenarios and that we should expose that functionality. I have filed a feature request for that ability to be included in blueprints. Hopefully this will be added for a future Rocket Beta release.

#BP Node For You Sjoerd

So I avoid dividing by the 10^precision,

my C++ algorithm is below:

I wrote a BP node to: 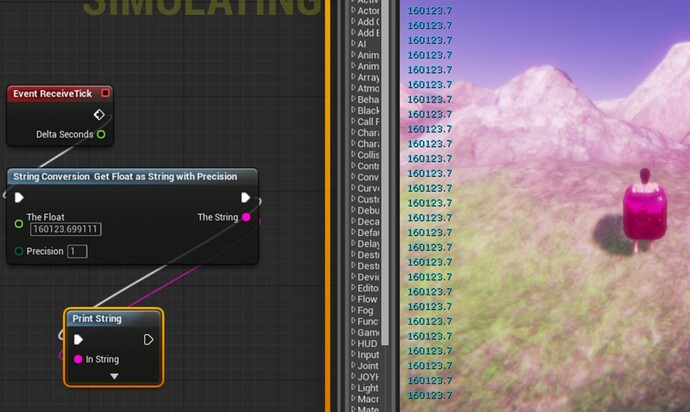 I had need to this post.
Steve, do you know if this feature has been add to the last release (4.3) ?

This is from an archive post that is no longer being tracked from our beta of UE4. Please ask this as a new question on the AnswerHub.