Note: this is a huge project-slowing bug for me, because I rely on anim notifies for a lot of things!

I have two animation blueprints that use identical setups, of caching a upper body slot pose and then distributing it to various parts of the skeleton using layered blends.

In one case, the anim blueprint works perfectly and the animation notifies play from the upper body slot correctly.

In my other animation blueprint, if the upper body slot is cached, the anim notfies are lost and do not play, I have verified from the c++ side tha the anim notifies are literally not playing at all (did UE_LOG tests)

if I attach the upper body slot to the end of the tree , so it is never cached, THEN the animation notifies are played! 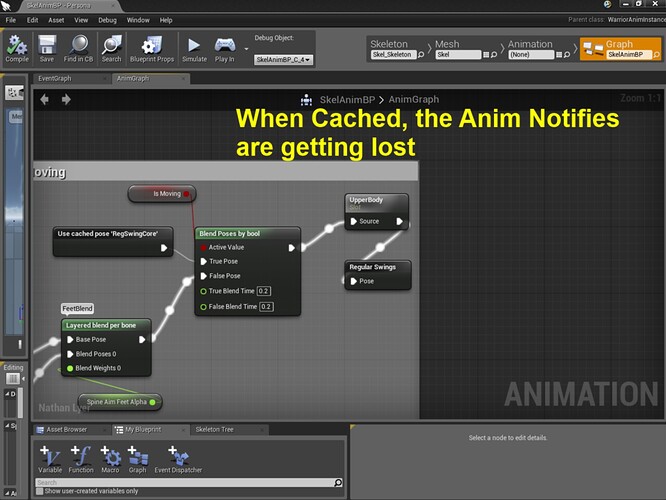 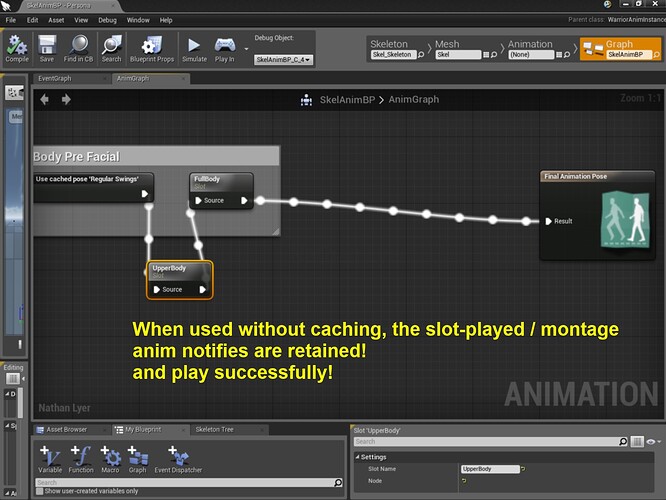 I used the Beta6 animation hotfix, the animation sequences involved in the second skeleton, that is having problems, were imported after the hotfix / beta6

I do not know why in one case this does not happen, but for my other skeleton / anim BP it is happening.

It would be very nice if I could rely on anim notifies to assist my combat collision system,

but at present I am being forced to set up timers in the C++ since I cannot rely on the anim notifies to work.

Apologies for the delayed reply. I did reproduce this issue in Beta 6. But I am glad to say that this issue does not occur in our current internal build. This should not be expected to be an issue in future releases.

I’ve tested this but not been able to reproduce the issue yet. For clarification, are the notifies that don’t show up Sound/Particle notifies?

the notifies that are not showing up are new custom notifies that I added using the right click option to create a new notify, int he anim sequence editor

But I am hopeful it will just go away in beta7