Periodically, nodes in Blueprints events can’t be deleted, with key or via menu (grayed out).
Only solution is to reopen a Blueprint.

For me this bug affects not only deleting nodes but also many other actions like renaming, copy-pasting, creating comments with hotkey and so on.

I wasn’t able to reproduce this in Preview 6. How frequently does this occur? Does it begin occurring while you are working in a Blueprint, or does it happen immediately upon opening the BP? What usually happens right before this behavior begins? Any other details you might have about what happened before this begins might be helpful finding the cause. Thanks!

It happened to me once when i created a new class blueprint in blank project with starter content. (followed this guide from the first step: - YouTube )

So after creating the new Actor Blueprint, what did you create that couldn’t be deleted? How far into the tutorial did you get when this started happening? Did you switch between the Blueprint Editor and another window at any point?

From that point any added node was undeletable (but i was able to ‘undo’ added node). I don’t remember if i switched windows, but more likely i followed the tutorial exactly.

Also i’m on linux if it matters. And built editor from 4.7 branch sources yesterday

It might. The 4.7 branch from GitHub is not Preview 6, either, and is much less stable.

Moxx, are you also using a Linux build? Did you also get your build from GitHub?

I am using windows build. Bug with nodelete happened frequently. I might try to force it and let you know how it happened.

Initially there was a problem when loading my project, which was working fine in 4.7 P5. I got these errors: 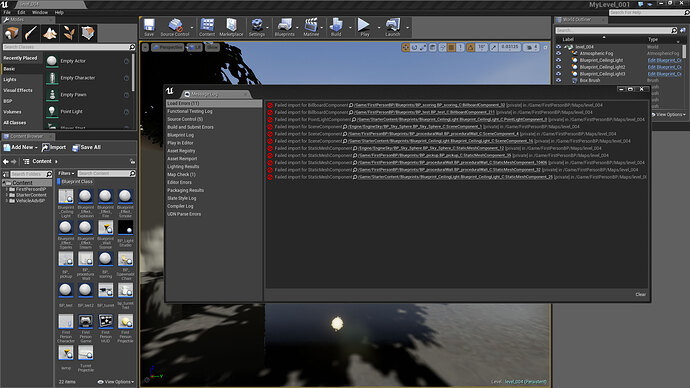 Second strange thing is that shadows was vanishing when moving camera around, but only partially! : 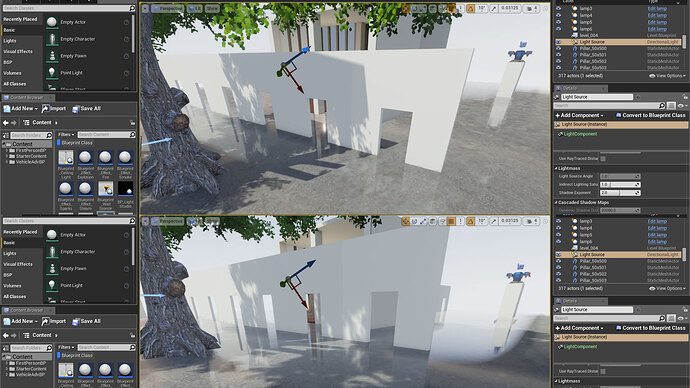 Then problem with deleting nodes, as this topic is all about.

Final problem (and I don’t know if this is the end of it) is warning message:

One or more blueprints has an unresolved compiler error, are you sure you want to Play in Editor?
level_004

I recompiled all blueprints without any problems, but message always pop up.

All start up errors appear to be fake ones, because everything is working, even after playing after warning message.

Sorry you’re running into so many issues at once! Since we like to track issues individually, it would be best if you opened a new post for each of these.

The first one appears to only occur with one BP, so it may be that the BP was corrupted and the components may need to be deleted/recreated. You can certainly ignore the warnings if they’re not causing an actual problem with the BP.

The shadows issue has been reported and already fixed internally, so that should be working again in the next Preview build.

The last issue, with the compiler error, might need its own post for us to investigate more thoroughly. I’ve seen that kind of thing happen before, but it’s always hard to see what’s causing it immediately.

We can look into any of those issues if you’re interested in pursuing them. I’d like to continue looking into the node deletion error here, if you’re still willing. Were you able to narrow down the steps you took to run into the deletion problems?

Of course, we DEFINITELY recommend doing your primary development in stable builds. 4.7 Preview is not recommended for actual development, and is mostly put out so that the community can help us find and fix bugs before the official release, as well as check out new features and offer feedback. If 4.6.1 is not blocking your productivity, please do continue your project there.

Sorry for posting several problems here. I am willing to chase that no delete problem. Will keep you informed.

I updated to version 4.7 P6 via launcher.

It appear that no delete bug is happening after some period of time.
I opened a new project - side scroller, start adding blueprints, and stacking them after scene tab. After 20-30 minutes, all opened blueprints stop responding on delete, copy, cut or duplicate.

I apologize for the delay in response. I wanted to check in and see if this issue is still occurring for you since 4.7.1 has been released, as we still have not been able to reproduce it here.

I haven’t heard back from you in a bit, so I’m resolving this post for tracking purposes. If you’re still experiencing this in the latest release (4.7.2), please feel free to comment here and we’ll continue investigating. Thanks!