[BUG][4.10 P2] UI is offcenter for dropdown menus and tooltips in editor 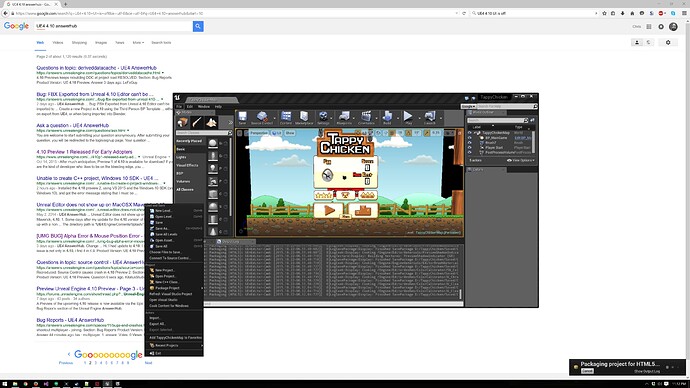 I’m getting misaligned dropdown menus and tooltip labels in 4.10 Previews 1 and 2. My resolution is 3840x2160. The attached image shows the problem.

Can you provide more information about the system you are on? Mac/PC, graphics card, processor, ram, operating system etc… ?

Yep. It’s happening on two computers now; the one I mentioned before, and a laptop MSI GT70, windows 10, 8GB RAM, GTX 770M GPU, Core i7 4700MQ CPU, 1920x1080 native display. I also forgot to mention that this is being built with a project generated with the -2015 parameter on GenerateProjectFiles.bat. I’ll download MSVC 2013 Community and try building with that to see if the problem still happens.

Just tried Visual Studio 2013 and Windows SDK 8.1 and the UI bug was fixed. So the problem is either with generating the project files for 2015 or using the windows 10 SDK or both.

Thank you for all the information you have provided and for narrowing it down to being a problem with “2015 or using the windows 10 SDK or both.” I have used this information to file the following bug report: JIRA [UE-22866]. When this issue is resolved, we will update this post to let you know.

Thanks again for bringing this to our attention and for your contribution in isolating the source of the issue.

I had a bit of time to look more into it and it seems like the problem is due to the Windows 10 SDK build setting. If you look at FWindowsApplication::TryCalculatePopupWindowPosition at line 355 in source/runtime/core/windows/windowsapplication.cpp you’ll see that it returns something other than false when the windows 10 version is set. I haven’t tried fixing it yet since for whatever reason Visual Studio 2015 takes a half hour to load on my laptop and even longer to build files, but hopefully this’ll help you guys track down what’s going on.

Thanks for the additional information -I have added it to the bug report.

This has been marked fixed for the next hotfix release of UE 4.10. At that time, please update the engine (to 4.10.1) and let us know if the issue persists.

Can you verify that this issue has been fixed for your hardware set up after updating to UE4.10.1?

Just tried it on 4.10.1 and can confirm that the popup UI elements are fixed. Thanks!

I just tried it with the windows 10 SDK and the 4.10.1 SDK code and can confirm that the issue is fixed and the popup UI elements are positioned properly again. Thanks!