I just wanted to introduce the game I have been working on over the last year and a bit. Its called Brimstone Brawlers and is made entirely using blueprints. I am a VR developer by trade but with my background in architecture and 3D modelling, my coding abilities are a bit lacking. I have found blueprints to be extremely powerful in this regard and have been using them since UE4 was released.

I am developing the game as a solo developer with the help of some very talented 3D artists on a freelance basis. The project so far has been entirely self funded and is a labour of love.

If this posts interests you and you think you might enjoy Brimstone Brawlers, drop by my discord and let me know you’re interested. I am looking for more alpha testers and would love the feedback.

Check it out and add it to your wish list if you’re interested! All of the support is greatly appreciated.

Brimstone Brawlers is an action packed beat’em up full of strangely aggressive brawlers set in a fantasy Victorian era world.

Pick from an early line up of peculiar brawlers with different abilities and play styles.

There is an early selection of action packed levels, ranging from simple arenas like Tavern and Rooftops to the super dangerous Train Station.

While protecting yourself from the onslaught of other brawlers, remember to watch your step as the levels are full of hazards and dangers, use these to your advantage and outplay your opponents.

Below are some of the mechanics and features you will experience in your average everyday brawls.

"Battlements gaze down from the mountain above the once mighty city of Brimstone - now obscured from sight. The era of enlightenment that had once fuelled new innovations and scientific discoveries has now turned to time of onslaught from a new industrial age.

Haze smothers the city, the canals are clogged with putrid filth and the citizens are reeling with fear. For those not struck down by illness or devoured by the grinding teeth of machinery, there is little hope. From within the shadows, a more sinister evil stirs.

Grotesque scenes of supernatural happenings are emerging, leading to rumours from the already trembling people. Glimpses of ghastly figures in the shadows, monsters roaming the streets and dark powers dwelling in the citadel.

Adding fuel to the inferno of misfortune, deep within the bowels of the city there are whispers of a new discovery - a haunting, corrupting, sulfuric substance, known only as plague fire.

With terror around every corner, the civilisation teeters on the brink of chaos. While some search for ways to benefit from the recent turmoil, hunters and healers of ageing ideals have entered the streets seeking to purge the city of evil. With most citizens in hiding, confronting those still walking the streets will often lead to all out brawls."

This game is currently in Early Alpha and supports single machine LOCAL PLAY ONLY. It requires multiple controllers to play on PC. I plan on releasing an early alpha version to the public on itch.io soon. This is in hopes of gaining some much needed funding to keep creating new brawlers, as well as to pay for things such as hardware which will allow me to attend and demo at upcoming events and conferences.

The store page will contain the following statement which highlights how I plan to use any funds made.

"This game is created by a single developer with the help of some talented artists. The project has been a labour of love and entirely self funded. All funds generated from sales of the game will go straight back into development, the goal is to complete many more brawlers and maps. "

The game has been developed for online play from the start and the feature does currently work, I just need to test local play first while setting up the online back end and Steam integration.

Thanks for taking the time to read about my project!

I have recently released a game play trailer of the latest alpha version! All of the footage and titles were taken in engine using sequencer, with video editing software only being used to transition scenes. Let me know what you think! I’m also looking for online alpha testers now.

I recently released online functionality to the alpha build! Anyone interested should jump onto my discord: discord.gg/ZEmzhBu and apply for alpha testing. Bring your friends and verse them online!!! =)

This needs more attention. Played it recently and it is already so polished!

amazing work , just when i think about giving up as a solo dev …this shows up in my unreal feed …thanks a lot man for the inspiration

Thanks! I actually have a Uworks branch of the project - getting it ready so I can move over to it for complete steam integration.

This looks great! I love the character design and semi-realistic cartoony style

Nice touch, having the projectiles able to collide like that. Wish I could do that in other games cough Overwatch cough.

the game is very nice

looks really great! any plans on a future Switch version??

Thanks for the feedback and support everyone!!! The game is now “Coming Soon” on Steam. Check it out here: Brimstone Brawlers - Early Access on Steam

looks really great! any plans on a future Switch version??

I would love to do a switch version but I have not looked into the process for building/porting to the platform. The game would definitely shine on consoles so I will be trying to ship to all of them. =)

Hey everyone! Thanks for the support so far. I’m still looking for more alpha testers so drop by and sign up!!! Bring your friends too!!!

Here’s an 8 player free for all from last week. 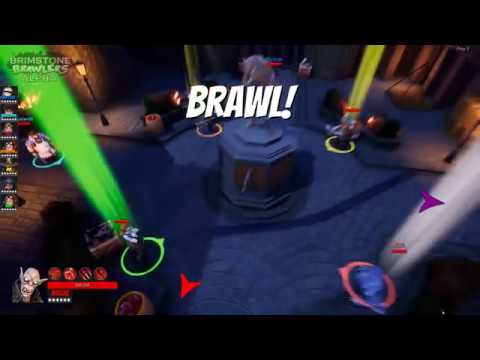 Another quick update. I’ve been working on a Combat Features Trailer for the game. Check it out:

Here’s another update. I have just announced the latest brawler roaming the streets of Brimstone. Meet the Countess!

I have also had a lot of feedback from streamers and have been making game play adjustments to make the game play and streaming experience better.

Check out some of the streams here.

Just a quick update, the game is progressing well. I have since added team game modes which are proving to be quite awesome. A lot of the abilities have been updated to interact with friendly targets now as well.

I have announced the newest brawler which will enter the game before early access is open “The Boxer”.

Hey everyone! We are looking for more alpha testers for the game. Anyone who is interested in seeing what type of project you can achieve in Unreal Engine using Blueprints should give the game a shot!

Feel free to drop past the Discord and say hello/apply for the alpha. =)