I’ve found that there is no problem to break text line in Multiline TextBox just by pressing enter in Text field in UMG Designer editor. My dialog system use text variable that is entered in Defualt properties. It’s looks like that thers is no enter key allowed in this window.

Have you tried pressing Shift+Enter? That usually works for multi-line text properties in the details panel.

Yes. I checked it, but with no results.

But meantime I found solution. I’m putting “@” symbol in one line text, and replace it before draw by Shift+Enter.

That’s not fantastic from a localisation perspective since it will break live-culture switching.

How is the text variable you’re editing set-up? Is it in C++, a Blueprint, or a User Defined Struct?

If you edit your User Defined Struct, you should see an expansion arrow to the left of your text property. If you expand that you should see a multi-line option that you can check to allow the property to accept multi-line input in the details panel (using Shift+Enter).

For reference in case you ever want to do the same thing in C++, it’s done by adding the “MultiLine” meta-data to a UPROPERTY, eg)

Live-culture switching is the thing that lets you change your games culture on-the-fly and have your UI text update. Since you’re converting text to a string, the version you pass to your UI has lost its link with the live-table so won’t automatically update if the culture is changed.

Thank you for reply. The message come to widget from text defined in user struct. This is clear Blueprint class. The problem is that I need to fill text with details panel. I cannot find any othre way to put text with enter in Message field. 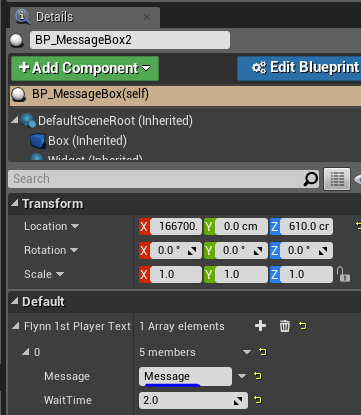 Can you explain me what mean " break live-culture switching"?
Is it serrious?