BP once only text

I have text that I want to run once and reset to a different text for every game.
When ever I put a “once only” widget the text still prints out.
I am using a binding to print the text.
“Get Comments Text Text 0” is the out put widget.
The input widget “Return Node” has 2 inputs(“Exec” and “Return Value Text”.).
The “do once” widget douse not stop the text from changing again.
“Return Value Text” widget needs to have the “do once” widget wired there, but text is not compatible with execution.
So after a while of trying to figure this out, I have given up. 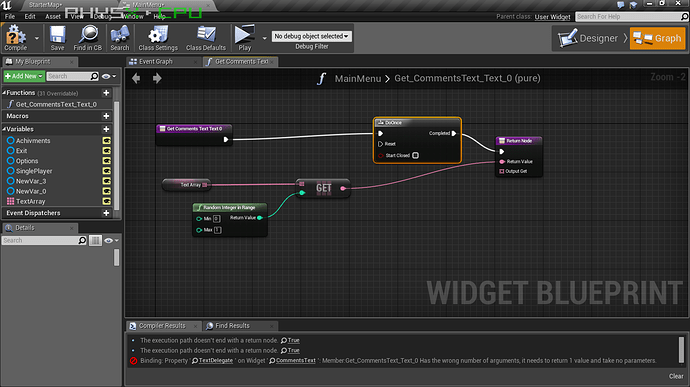 The DoOnce node doesn’t work here because it’s being recreated each time the function runs, resetting it. Instead, you might add a boolean variable to keep track of whether the text has been displayed.

Alderbit is correct. You could also try putting the DoOnce outside of the function and have it call the function instead.

So I have changed things around and this is what I now have except that the “once only” widget is ineffective. When the game is opened, launched or executed is when I want the text to be randomly selected and not any other time in the game!.alt text
alt text
Why was this question marked as solved when I did not say this was solved.

I am marking this solved and will use a savegame C++ template to do this.