I’ve looked at all the other issues on the answer hub with similar problems, but they were all from 2014 using much older version, they also very rarely solved their problem, maybe updating to a new version could be the answer, but that is not an option for me.

The issue is pretty much what the title says, everything is working fine, I close the project and reopen it and find something is not working as intended, it has happened twice now, but for all I know it could be happening more and I’m only noticing the pins that have a visual effect.

First time it happened to my player controller, on button press, call a function in the controlled pawn that activated a bool, on release set it back to false, this was being controlled by a function with a bool input, however this was always reset to false causing the input to do nothing, by setting the bool directly this solved the issue… Now it’s happened again in a different blueprint, the game mode.

The game mode spawns all the players and sets the team id using a variable exposed on spawn, however this disconnects any input pin, causing all players to always be on team 0, I can plug it back in and go on my merry way until I reopen the project, but I believe from reading other peoples issues that this will disconnect when compiling the project.

It’s bugs like these that really put me off UE4, at any moment, through no fault of my own my project is completely unusable, the more complex you make a blueprint, the more likely it will corrupt. 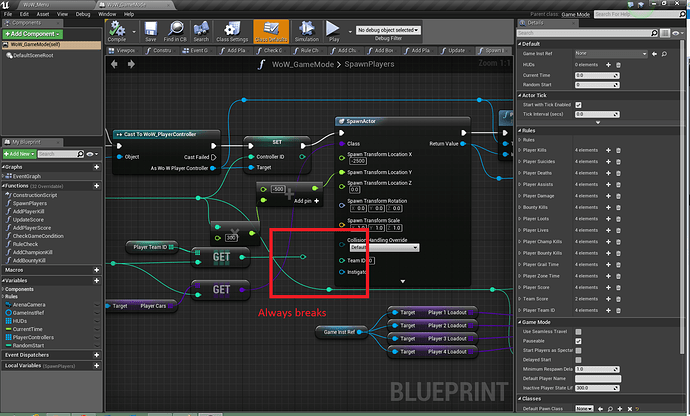 Have you tried fixing up redirectors in the folders that contain your blueprints? To do so, right click on the folder and select the Fix Up Redirectors in Folder option.

Let me know if that makes a difference.

That didn’t solve the issue with the build from this morning, but I’ve been working on the game all day and with that build the problem no longer persists, however compiling any blueprint, saving, loading a map, pressing play and pretty much anything will cause the engine to crash.

The weird thing is, everything worked perfectly fine except a collision was triggering oddly, which was why I restarted the editor. A friend has suggested it could be to do with zipping the project up on a daily basis, being as I’ve been doing that for the last 25 days, I guess regardless of how far back I go, the project is doomed.

If you are experiencing a crash now, please create a new Answerhub topic for this crash, as it is a separate issue. When you have done this, post a link to the new question in this post and I will move over to that post to assist with your crash. In the meantime, I will be marking this post as resolved, as you have stated that your issue has been resolved. Let me know if this is not correct.

Hmm, no, I think we need to solve the initial issue as the crash is clearly unrecoverable. I opened up the build with the initial issue and started re-implementing everything I did yesterday, closed the engine and reopened it, didn’t crash but now the broken link has moved to a different node in a different class, it is now in my base player pawn, on an array add node.

From experience with corrupted ue4 project files, I’ve never found a way to fix them, are they fixable? Or will the issue always be waiting to destroy everything?

As far as a project being corrupted, if there is a problem with a specific asset, you could try reverting to one of the earlier versions stored in your project’s Saved folder, but this is not always 100% reliable. I recommend using Source Control in the future, if you aren’t already, so you can have something to revert to if there are any issues.

This could be related to a circular dependency. You could have a reference that it needs to grab from the player controller, but in order to grab that reference it would need to communicate with the base pawn, and then in order to get that information it would need to communicate with something from the game mode, and so on. If you can discover what this circular reference could be, and break it, do so and let me know if that makes any difference.