Box Collider not blocking with skel mesh parented to it

So I made the move to UE4 from unity, and haven’t had any issues until now. I have a character blueprint with the skeletal mesh and I have movement mapped to it. Anyways I have put random blocks to test blocking abilities. With both the character collision box and the box set with block all, just to make sure there is no chance it could pass through. The character I have moving around the scene is mapped to WASD.

Alas, it passes straight through. I don’t know if I am missing something particular. I’ll post some settings pictures and BP stuff.

I have also tried the same thing with a PAWN class, Knowing that it couldn’t change much. 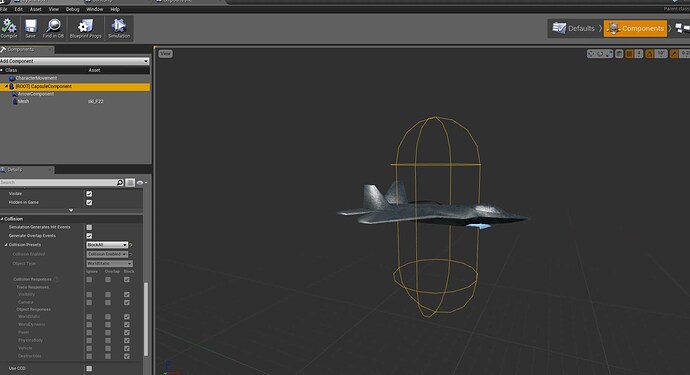 Any help would be appreciated.
Thanks.

Have you verified the blocks in the level have collision properly? Some of the default primitives may not be set to block or even have collision. If you have the example content try the example game and see if it collides.

I have, But I think I have figured out the problem. I Needed to have for whatever reason that I am unsure about. When I first made the controls for movement of the ship, I made it all inside of the the character class. And used the set actor location, which I am guessing doesn’t take in the collision info. So, I moved most of my BP code over to a new character controller class and used add movement input instead. This works with collision. This is as far as I understand it. If someone else that knows more about it then this. I would like a better explination. So, Anyways. I have collision working now. Which is nice. But wish I could use my previous movement code. Not through the Character controller.

That will definitely do it. Typically to move the character you want to use acceleration to move him around so the physics system will handle your collision. Setting an actor inside another is allowable so you will have trouble with that.

Check out the way the character movement component works to see a more valid form of movement.