Hi i am I want to blueprint a score multiplier kinda like the ones in halo the double medals ect i was wondering how you would blueprint that, if that makes sense sorry not to great at explaining it hope thew picture kinda makes more sense hahah 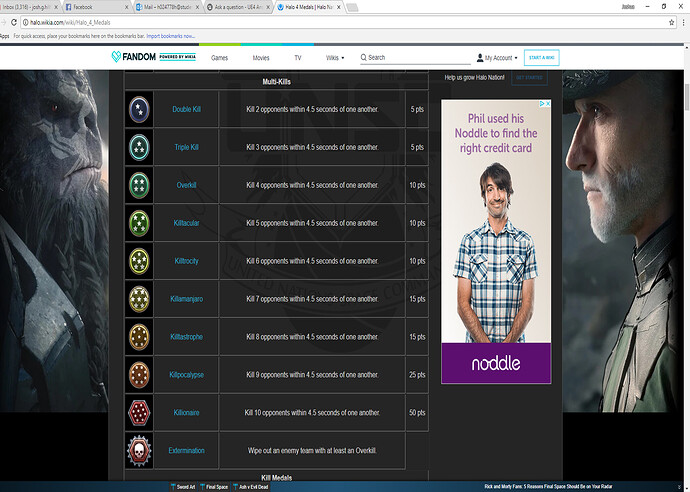 What kind of score multiplier are you looking for? Exactly like Halo? You want to add bonus points for stringing kills together in a certain amount of time? I would need some more info before I can give you any tips on how to script the logic in blueprints.

So you probably need some sort of “timer” in the player character or wherever you are keeping track of the players points, and once a kill is registered have that kill event call a function or something that starts the timer. Then you would need a boolean for “Kill String” so when the first kill is registered, any additional kills registered during the period where the timer is on will add to a separate variable that keeps track of the “string” of kills. once the timer ends, it will then get the value of the “string” of kills and from there you can add whatever bonus you would like to the player score depending on the number of kills registered. Then be sure to reset that number to 0 for the next time a player kills an enemy it will start the process over form 0.

it would be adding bonus point for stringing kills in a certain amount of time, also using integers not floats

awesome thanks will have try these methods

It won’t make a difference if it’s an integer or a float. The logic is the same either way, the only difference is whether or not you can make decimal values for scores or not. Integers will not let you multiply by 2.5 for example, so you can’t have a “2.5x” multiplier using integers, but 2x or 3x is ok. Floats don’t have that restriction.

Yea that would work too, wasn’t sure if it is a “total” of X seconds since first kill which I don’t think a retriggerable delay would work in that case as it would constantly get reset at each kill, or just “X” seconds between kills, which if that is the case @ThompsonN13 is right, retriggerable delay is much better. I haven’t played Halo in years I don’t know their exact methods for that haha

thats a good point i didnt think about it being in relation to the first kill. that could be a good way to do it too then. i never really played much halo myself so i was thinking about games like ut2004 and others

Haha, no worries. We were just coming at it from different angles. But both are useful in their own rights, depends on the type of game you’re making. Anyway, I think this should be good enough to start scripting some logic.

hi have had ago quite new to this so not really sure how some of the stuff is done if you wouldn’t mind helping with this.
thanks

what specifically are you having an issue with?

setting up the retriggerable delay

heres one way to do it. just before the enemy dies it calls the increase multiplier event. the event first gets then increments the multiplier variable. then starts a delay, if the delay reaches 0 before getting called again then the multiplier gets sets back to 1.

awesome thank you very much