Hey, im trying to make a topdown game with WASD movement and aim with mouse, so the character is always facing the mouse. using a method from a youtube tutorial, like this: 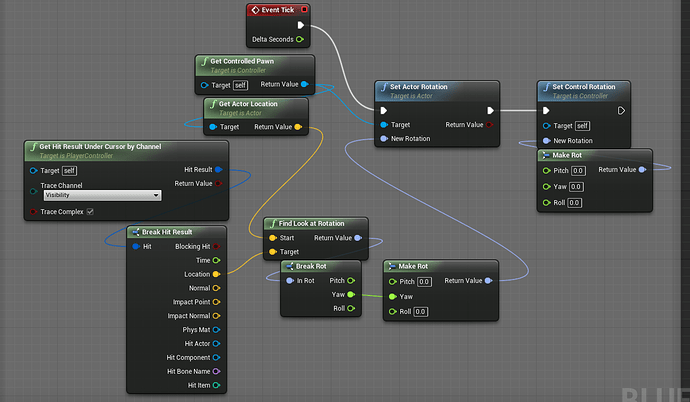 Inside my Controller blueprint.

The server sends rotation info correctly to the client. The problem is that the server sees the other character always facing 0,0,0. So what do I do to make the client send the info to server?

Yep! played around with those settings, no difference

Is your character set to replicate movement in Class Defaults?

Ok, good to know. If you select the players Capsule Component and uncheck “Hidden In Game” under “Rendering”, play the game, and closely observe the capsule, is the capsule rotating independently of the player mesh or are neither of them rotating? I had a problem before where my capsule was rotating properly but the player mesh was always pointing to (0, 0, 0) and was not following the Capsule.

The capsule don’t rotate either. There seems to be alot of users who got the same issue.

I get this error:
Error Accessed None ‘CallFunc_K2_GetPawn_ReturnValue2’ from node Construction Script in blueprint MyController.