Hi, I’ve created a shoe stand BP with shoes on it. When player approaches shoe stand a trigger box is triggered and the player is rendered stationary, cannot move and a mouse cursor appears. This gives player a chance to choose shoes with cursor without interfering with player movement. If the player wants to move away from shoe stand, or be released and be able to move again they just click right mouse button. This will release player and hide mouse cursor. Please see attached trigger box BP. This BP seems to work up to a point. Once the player crosses the trigger box they do stop moving and mouse cursor appears, but nothing happens when I click right mouse button, and therefore player cannot be released and walk away. Anybody know how to fix this or a better way to do this, thanks. 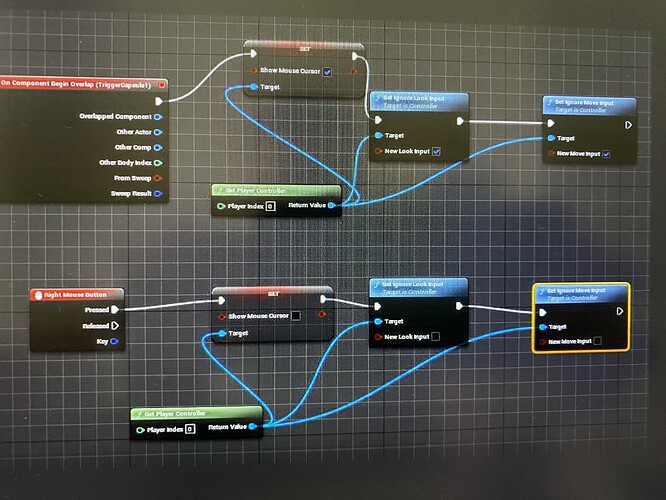 If you’re doing this inside of a Blueprint, you’ll need to explicitly allow the Blueprint to receive input events.

Are you going to make more of those triggers? If you keep enabling input in actors, it may become unmanageable at some point.

How about you create a custom event in the player controller / pawn and have the shoe box trigger call that:

I’d put this in the PC, seems like it belongs there - unless the Pawn is also using RMB for something else. Then I’d have in the Pawn.

And yet another way is to have the player detect what they’ve run into rather than rely on the shoe box.

Thanks for the reply, I am doing this inside Blueprint, how do I allow the below blueprint to receive input events? Where is the Class Defaults section ?

Thanks for the help. I am only making one trigger which will be copied to multiple Shoe stands. I will try put in Player controller. Thanks

It seems that after you enter the trigger box, you disable the player’s input, so you click the right mouse button and nothing happens. 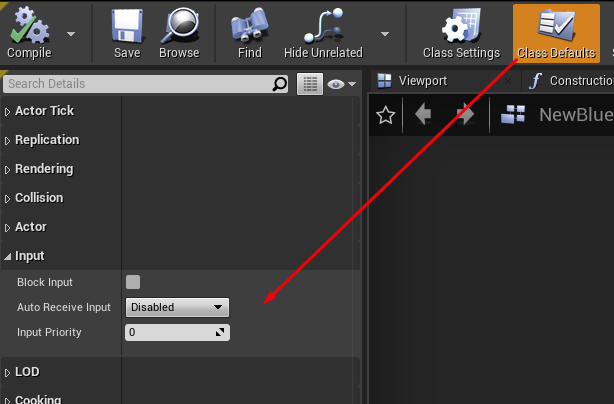 But I can’t recommend this approach. Good luck all the same, though.

Yes that makes sense, so you mean if I disable the players input, then I wont be able to use any keys cause all disabled? Cause I did try other keys to press instead of Right mouse button and none of them worked.
Anyway I can fix this or maybe use some other nodes in BP?

nice one, that worked. Now I can release the player with the right mouse button. Why do you not recommend this approach?

Why do you not recommend this approach?

Lets say you enabled the input, as you did. You actually enabled it in ALL triggers, you click once and all triggers run their scripts.

And if you want to evoke RMB elsewhere… now you cannot because the triggers consumed it. You can disable consumption, ofc, but if the player now RMB to Crouch (let’s say), it will fire all triggers anyway… because they can still use it.

There is a reason why the input is disabled. Not to mention the fact that you’re allowing actors to fiddle with the player controller. It’s just not that good practice.

Do ignore the above micro-rant if you own a single shoe rack only (like me!) and have no other plans for the RMB.

Not stupid at all, actually. It’s just an input processing thing. Set Input Mode UI Only prevents the Player Controller from processing input - pressing M while this mode is active does nothing, the PC ignores it, as instructed. The input is processed in the widget instead since we’ve given it to the UI exclusively - Set Input Mode UI Only You can have it processed by both (widgets go first, though) with Set Input Mode Game and UI node but if you’re making a first person shooter kind of game (…

Imagine that instead of M, the player overlaps the trigger and the widget overrides RMB.

Thanks alot again for all the help, very much appreciated