**Detailed description of the issue: **

When using the volume keys on my keyboard the blueprint editor zooms out, regardless of increasing/decreasing the volume (it does not zoom in again). This issue is not present on Unreal Editor 4.17.2

Screenshots/Link to video:
Webm of the problem

This is unrelated to Logitech products, I’m experiencing the same issue with a different keyboard on Win10. Also, technically, this is not keyboard related either. I believe it’s the media keys, or whatever is sending information to the volume mixer:

Both VolumeUp and VolumeDown actions zoom out all editor graphs, regardless of what device sends the request. This is also true for the [menu key.][1]

There’s nothing in the editor key binding that could explain that: 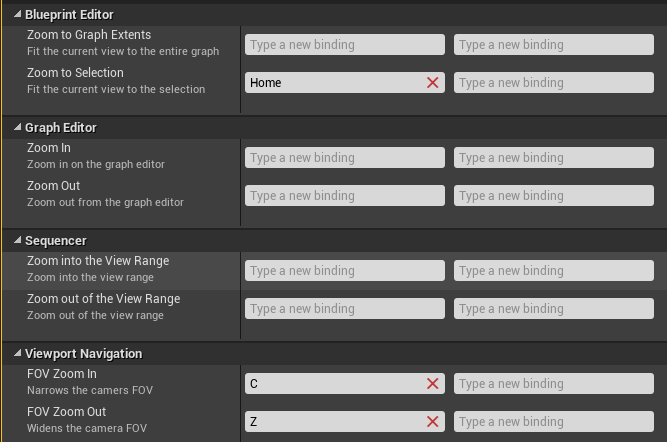 This behaviour was definitely absent in 4.17.

@pieterdb thanks for bringing it up, I’ve been experiencing this since 4.18 but was under the impression it was my system-specific issue - a weird shortcut of sorts that messes about with UE4.

My zoom shortcuts are also set to the defaults, both in 4.17 and 4.18 so I can also confirm that this isn’t the culprit.

4.18.1 Hotfix just came out and I unable to replicate this issue so I believe it is fixed. Give it a try and let me know that resolved it for you.

Yup, that fixed it. Thanks.

I can confirm it as well

Is there any means of closing this question, or is having an accepted answer enough?

Accepting it is good enough