Hello!
I have TWO exactly the same BP script at the same level. But for some reasons, the first script works, while the second script doesn’t work. All actors are movable. 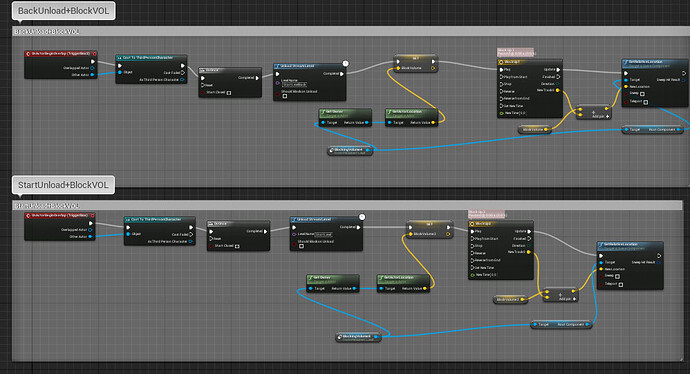 Why? Maybe only one TimeLine node might be at the same level BP?

Do both Triggerboxes have their Generate Overlap Events checkbox ticked?

What kind of object are the triggerboxes and is this blueprint in your screenshot a level blueprint or an actor blueprint?

Basic trigger box. And it is level BP

Can’t see anything wrong with the BP so far. What do the Timelines and their curves look like?
Also might be a good idea to add breakpoints or printstring logs to find out whether it’s firing the event and just not acting how you expect, or if it’s not firing the overlap event at all.

Does it work with other actors and just not with blockvolume8? If it doesn’t work with any actors, then let’s see the inside of the timeline. Maybe something is wrong there.

Yes. It does not work with any actors

Looks okay. What happens if you plug the execution wire into the Play From Start pin instead of the Play pin?