Blueprint Components messing with my Pivot!

I’m trying to create some pretty basic Blueprint components of different meshes to work as prefab parts to build a small little town. All my pivots on the individual meshes are exactly where I need them and i’ve made them with modularity in mind so they all snap fine when I start placing them in the scene. That is until I try and create blueprints of several regularly used together meshes. The pivot goes somewhere else and it no longer snaps. Is there any way I can get the pivot to be on one of the meshes within the blueprint rather than just out in space somewhere? This is driving me insane and I can’t find an answer anywhere!

This is an example, I have the corner piece and then the smaller meshes underneath it that i’ve put together as a Blueprint Component, as you can see though, the pivot has gone off somewhere else. The pivot of the pieces on their own is right where I need it to be, it’s only when I put the blueprint together that I get issues. 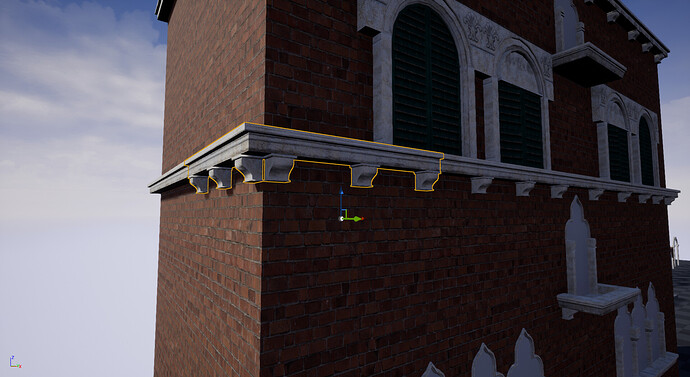 I may have gone on more than I needed to but if anyone has any clue how to solve this it would be greatly appreciated.

The pivot point of the blueprint isn’t “somewhere else”, but normally is identical to the center coordinate in the the viewport of your blueprint (DefaultSceneRoot).

So if you position the meshes inside your bluprint so that the desired mesh’s point falls at location 0,0,0, it should also align to the pivot point when positioning it in the world.

Can’t believe I didn’t notice that. I realise now that I had selected meshes from various spots already in the scene and made Blueprints from those selections so they didn’t line up properly in the Blueprint viewport. But as you said, getting the main mesh onto the 0,0,0, and building from there solved the issue. Thanks so much.