[Blueprint] Attributes of different instances of the same blueprint

Hey guys,
I’m just getting into scripting with Blueprint and got along with it so far.
I want to build a “Progress Button”, which means it should be a button that has to be pressed for a (set) Time Limit.
I did manage to get that funtionality so I can press the button for the stated time. However when putting two instances of that Blueprint into my level I can only use one, when the other has been completed.

The functionality is as follows:

The player walks towards a button. When he is in range of the button pressing E will start the Timer how long the button has been held. When the user leaves the trigger area or releases the button before the Time Limit the button gets reset and the player hast to restart. When completed the Button is stated as “AlreadyUsed” and is not longer available for usage. I tried making it fair and adding the percentage of time since the last frame was updated.
So the function looks how long the button has been pressed every frame and sets the Button to (TimeHeld / TimeLimit)*100.
The Button itself is working just fine, the only issue I have is, that the Variables seem to be a shallow copy instead of a deep one.

How can I tell UE4 to use new instances of the blueprint whenever I place a new one into the map.

TL;DR Variables are dependend on two of my blueprint-objects. How can I manage to seperate them? 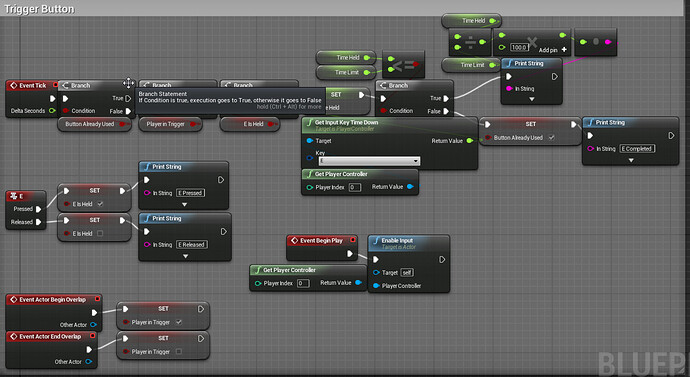