I wrote a script that some other UE4 and Blender users might find useful. The UE4 armature does not follow a bone naming convention that Blender recognizes, so you can’t use bone mirroring while editing or animating. To deal with that, I wrote a script.

The script adds some buttons to the 3D view panel that will rename the bones in a UE4 armature match the Blender naming convention. It will also reverse the process. It will rename both the armature’s bones and the bone data paths and group names in any actions in the same Blender file. There’s also a third button that will rename the bones in an armature exported from the Shooter Game content example so that it uses the same bone names as the normal Epic Skeleton naming convention. I’m not sure how useful that is now that the Unreal Editor has animation retargeting, but I left it in just in case.

Hope this is helpful to some of you. Here are the buttons as they appear in Blender: 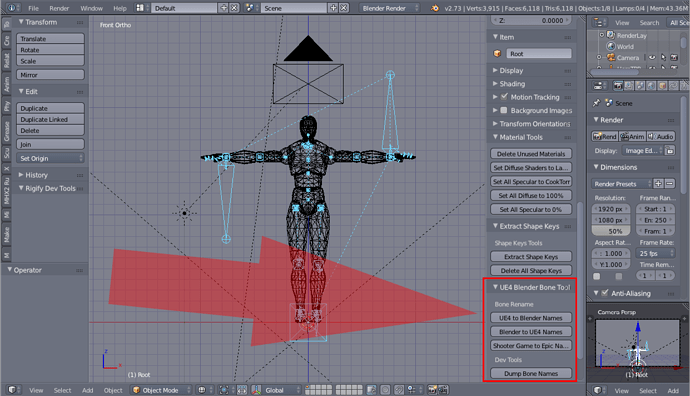 Here’s the actual script, which can be added from the Add-ons tab of User Preferences
util_ue4_bone_tool.py.zip (2.76 KB)

Awesome! Thanks for doing this, I’m sure a lot of blender folks will find this useful!