There are 2 issues I know of when exporting an FBX from Blender and importing it in Unreal: 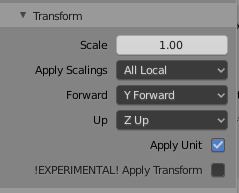 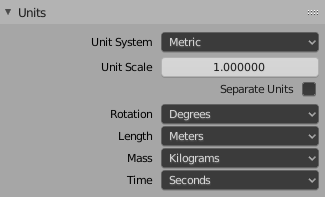 [HR][/HR]
Issue 1 Workaround:
The issue is addressed here: https://answers.unrealengine.com/que…0-degrees.html
The first workaround is setting an import rotation in the Editor of [FONT=Comic Sans MS]-90° on the [FONT=Comic Sans MS]Z axis.
It does work, for post import fixing you can do a bulk edit, set the rotation and then hit reimport.

The second workaround is setting the export forward axis in Blender to [FONT=Comic Sans MS]X+ from [FONT=Comic Sans MS]Y-.
This sadly has no effect on the imported FBX in Unreal, it would be the better solution. [HR][/HR]
Issue 2 Workaround:
There are numerous described fixes including the units scale and import scale, I tried them and had no success.
The unit scale in Blender and also the length unit seems to have no effect on the exported FBX also not when
setting Apply Scalings in the export transform options to FBX Units Scale (or other), the only thing that this does is scaling the object
by [FONT=Comic Sans MS]0.01 no matter what the unit scale is.

Thanks, it did the trick. Works in UE5 too.