I am not sure if this is the right forum so I apologize in advance.

What would be the easiest way to get an animated character from Blender into Unreal? Lets say I use Riggify or BlendRig5 to rig and animate a character. Is there any way to easily attach a root bone without jacking the whole skeleton up? I know Unreal refuses to import without a root bone. I don’t know if this helps any but I am not trying to make an animated game character, just a character that I would like to render an animation of using UE4

Watch the vid, and realize that the settings have changed.https://youtube.com/watch?v=Ayp1lof0RJUIt is still useful to watch, as most of the settings are explained.
For smoothing in UE4.12, with Blender 2.77, use “Geometries > Normals Only”. It used to be “Edge”, that does not work anymore.

Vid part 2, for referencehttps://youtube.com/watch?v=BeaKeiepoas
You should have a root bone for your character anyway, it is good basic practice.
I recommend experimenting with a simple rigged character first. I used Suzzane, the monkey head, with two levels of subsurf applied, then I rigged the ears to wiggle. Bear in mind that UE wants every vertex to be weighted to a bone, so you will need to weight to something, a head bone or even the root bone.

For that matter, I recommend Blender Cloud, and CGCookie, both have helped me tremendously.

Blender Cloud is a web based service developed by Blender Institute that allows people to access the training videos and all the data from the open projects.

"Got to ask what did “they " do with the 10K grant?”
Coke and hookers, of course. Gotta keep team morale up!

You don’t need a Blender root bone for UE4. Usually you would get 2 bones in UE4 if you do that. One bone called like the armature and a further one as next branch called root. Just call your armature in Blender “root”.

Usually I export/import twice. First time the mesh without animation and afterwards the animation without the mesh. Afterwards importing the mesh in UE4 and when I import the animation then I choose the skeleton of the just imported mesh. Works well. Even if I’m going to reimport later. 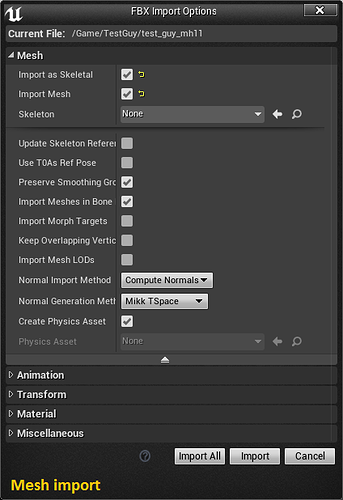 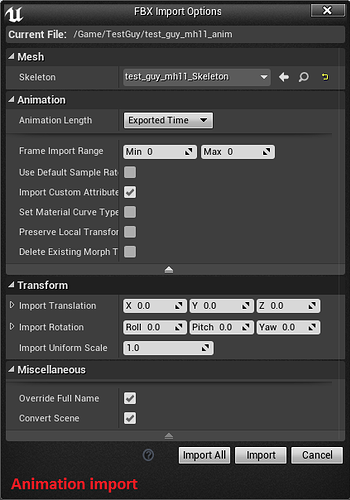 I did not use rigify for UE4 so far but I think it should work as well. There is even a UE4 plugin for Blender [ADDON BLENDER] UE Tools - Community & Industry Discussion - Unreal Engine Forums

I’ve tried rigify Blender 2.77 with and without a root bone, and it works. I believe there will be a root (empty) urgency for doing any root animations.
I do figured out, that we can export all animations as NLA’s with the fbx (as binary), be sure that there is no aktive Action before export. “But the naming of all fbx-implemented animations will start with the Name of the mesh. And this make it hard to find the right name in the stack.”
Also i can ex/import a **rigify **rig as it is (check deform bones only). No need to change from blender Units to metric system.