Hi … I’m having an issue importing my Blender content into UE4.27. I have created a UV sphere and applied a mostly transparent PNG (with some visible text) to the surface. By using mix shaders (as per screenshot) I am left with a mostly see through sphere that has just the text showing. By going into the sphere, you can look out to read the text in a dome around you, which is the effect I want. 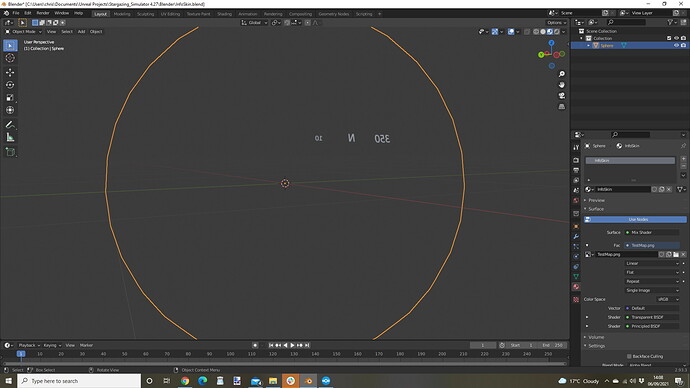 Now, I’m needing to export this out of blender to a .fbx file and then import it into UE4 as static mesh content, but when I do so, it seems to lose its ability to appear as it does in Blender. In particular, it loses its PNG material skin, such that it just appears as a basic coloured sphere in the content.

Can anyone please advise what I’m doing wrong, or does UE4 have an issue with importing mixed shader .fbx files?

Yea simply do not.

Re-create the material in engine, call it whatever is relevant.
Prefix it with MI for material instance (eg: MI_red)

Change the material name in Blender to the same (MI_Red)

And on fbx import select
“Do not create materials”
Search project folders / subfolders.

The import will automatically populate the appropriately named material instance (the first one it finds so try not to have 2 instances with the same name) as the material for the mesh.

As far as recreating the material in engine, if you are lost ask in the rendering section and provide a screencap of the blender shader.
It’s probably pretty simple to convert yourself though.

Great … thank you. It’s useful to know that it’s not always worth busting a gut to get it nailed down in Blender before export. Your comment was my inspiration to revisit the functionality in the UE4 material editor, and I’ve now managed to recreate the effect.