Participated in the Global Game Jam 2020. Big Huge Games hosted the site and showed everyone a great time while we all hit the grindstone and created some fun games. For my entry, I created an AR tower defense game. Am pretty happy with how it turned out, so gonna bring this to market as F2P in some form or another. For this game, I’ll include a tracking marker and 3d model file to download. I haven’t done too much research in AR gaming quite yet, so this game may pivot over the course, but in the meantime, here are the design docs and first prototype:

The core feature is that a tower is constantly being reconstructed and destroyed leaving a giant blast point on the ground (the image game trigger). Players have to repair the broken turret in AR and when completing the puzzle, the turret becomes active alerting nearby drones to try and reclaim the territory. Aiming at the drones will auto-rotate the turret to fire at the drone. This occurs on a relatively small scale/space so players can play on their office desk or home workstation / study area.

The long term vision is to make a complete kit of tiles that would trigger different battles/game types based on the tile patterns or design, but this depends on early traction with core gameplay and AR market analytics.

Development updates on battle mode in Blast Point. Added some improvements to the UI including some menus with options. Also built in a UI system that encourages players to keep the marker target within bounds of the screen. Next step is the puzzle UI for turret reconstruction mode.

Blast Point is now live as Early Access in the Google Play store! Downloads for the marker, 3d printed base, and app are available http://earthborninteractive.com/blastpoint

Now i’ll be working on the iOS build, as well as continue to integrate additional features to make the game as accessible as possible. That includes the version that can just use any surface instead of an image marker, and also a version the renders out the full tower if the 3d printed base is not desired. Part of this process also involves building a little board game kit that i may try to crowd fund or something so people can just order the kit off the shelf. Here’s a screenshot of the website page with the downloads:

Blast Point v0.3.3 can be downloaded for free here: https://play.google.com/store/apps/details?id=com.ebi.blastpoint
> Includes multi-scalar support - The gameplay will now scale with size of the image marker
> Surface tracked gameplay - using mostly the native Handheld AR blueprints, i’ve included a mode that players can play with just surface tracking. This reduces friction for gameplay so players don’t have to download the image tracker or 3d printable base.

and speaking of 3d printable base, all kinds of ideas are now brewing with ways to combine 3d printing with augmented reality. the catalytic reaction has been nice for creativity and brainstorming.

> New downloads are also available for the image marker and 3d printable base at earthborninteractive.com/blastpoint
> Fixed a bug with puzzle piece selection that made it difficult to select puzzle pieces sometimes
> Improved HUD formatting for additional device compatibility 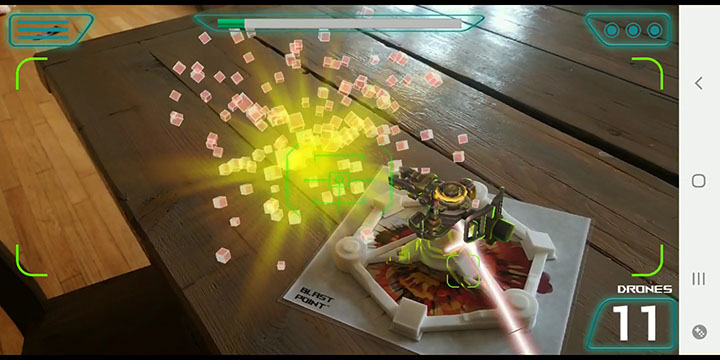 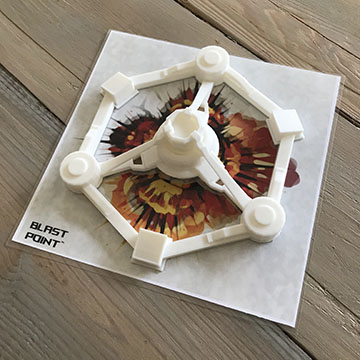 Here’s a look at some gameplay with the newest gameboard build:

This has evolved into a few more brainstorm concepts as mentioned earlier in the thread, so here’s a look at the gameboard for another AR port i’m working on using UE4: 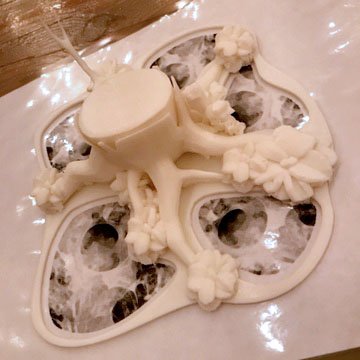 Beginning to set up the kickstarter for these augmented game boards. The kickstarter campaign will include 3 game boards on initial campaign launch, however there are two more also in early production that i may be able to squeeze into the campaign shortly after launch. Here’s a look at the temple ruins themed game board. The game board was kit-bashed and then cleaned up for 3d printing, and the spawned character is currently a placeholder from the marketplace. 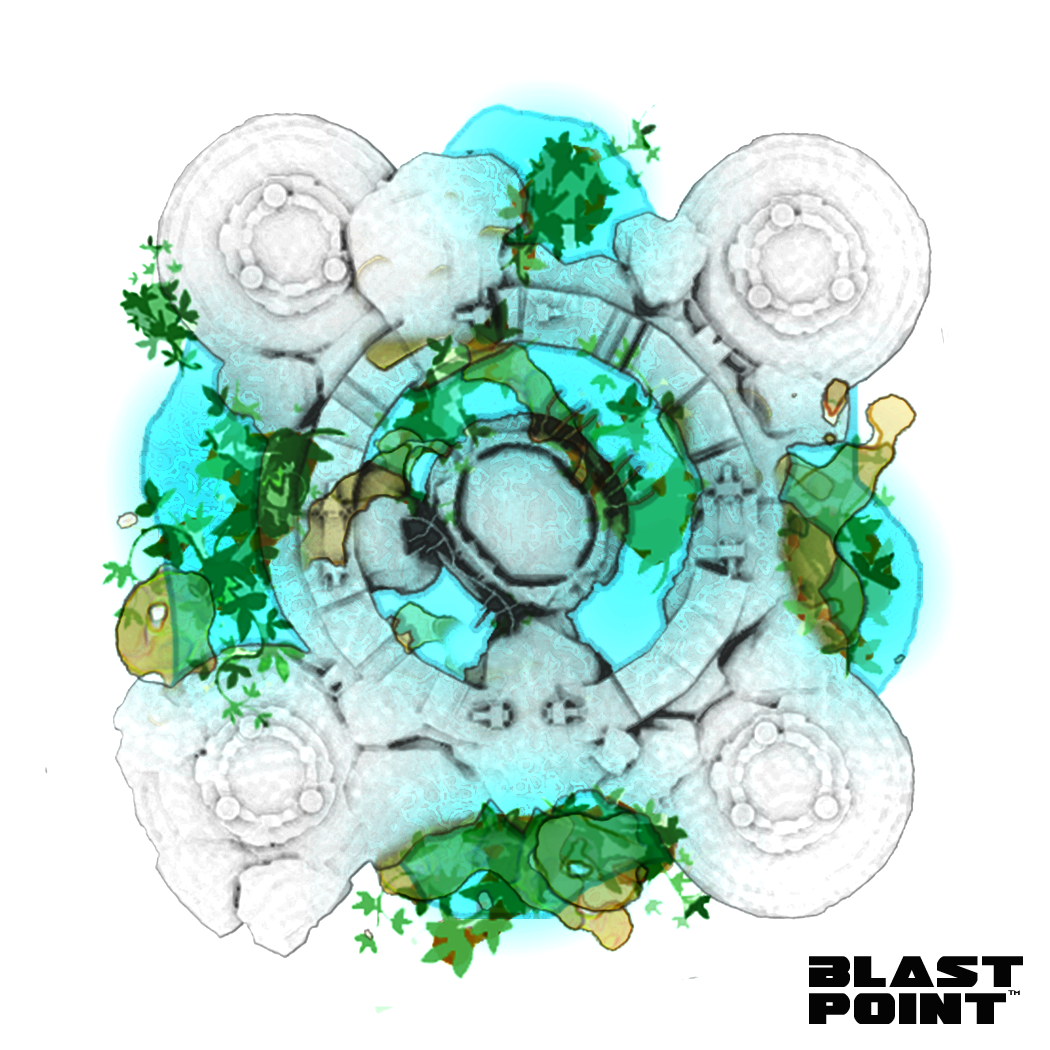 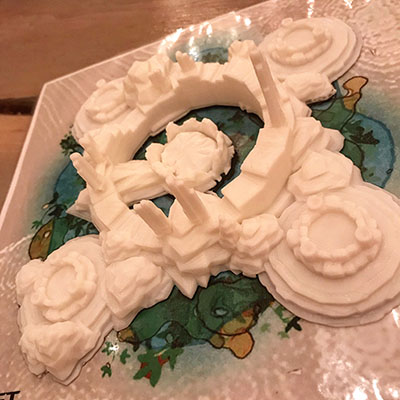 Just released v0.4.0 on the Google Play Store.
It took some time to convert the code into more of a template style code base so i can add more boards later with minimal impact.
Here’s an early look at some of the marketing images i’m developing for each game board. 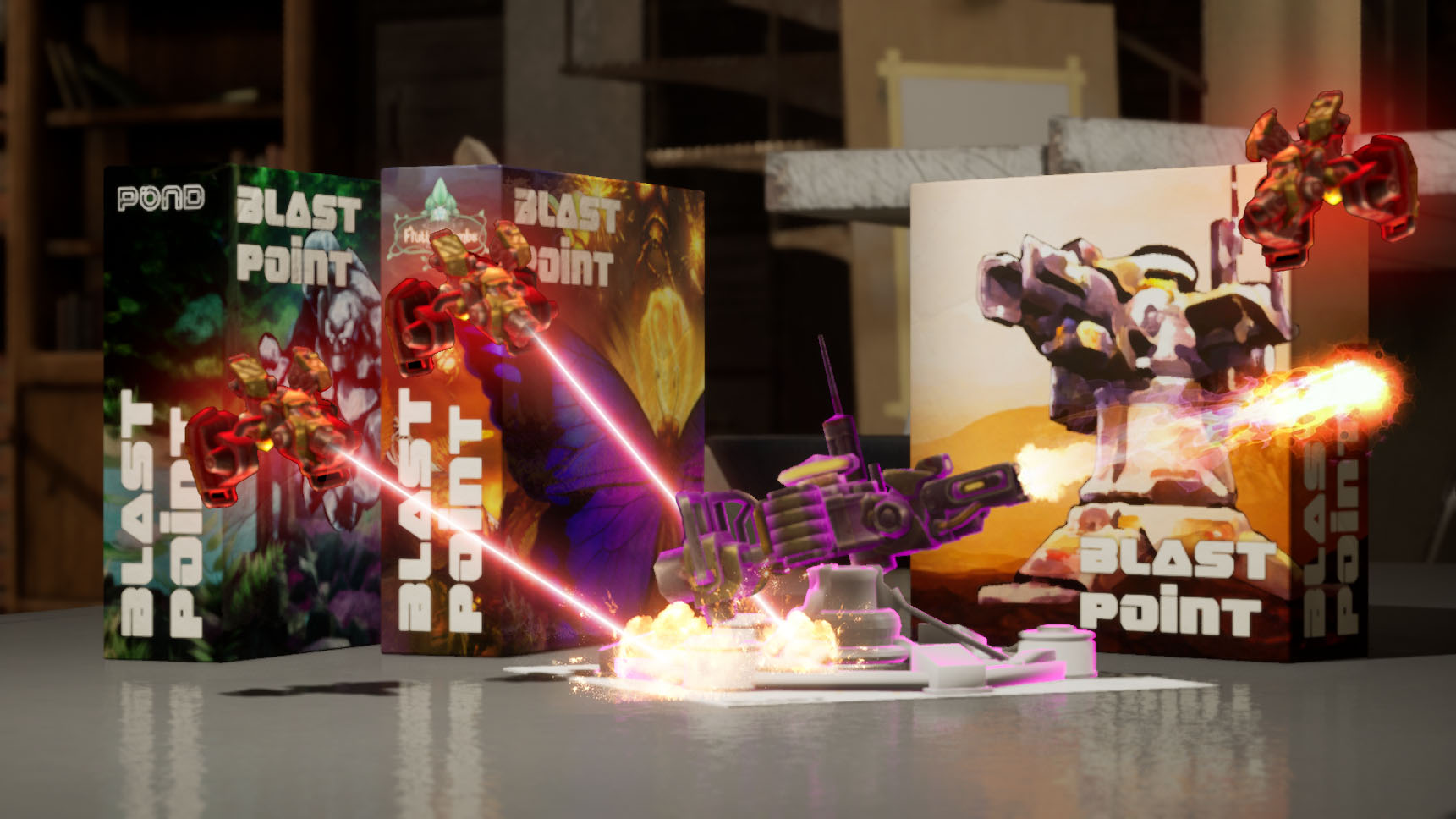 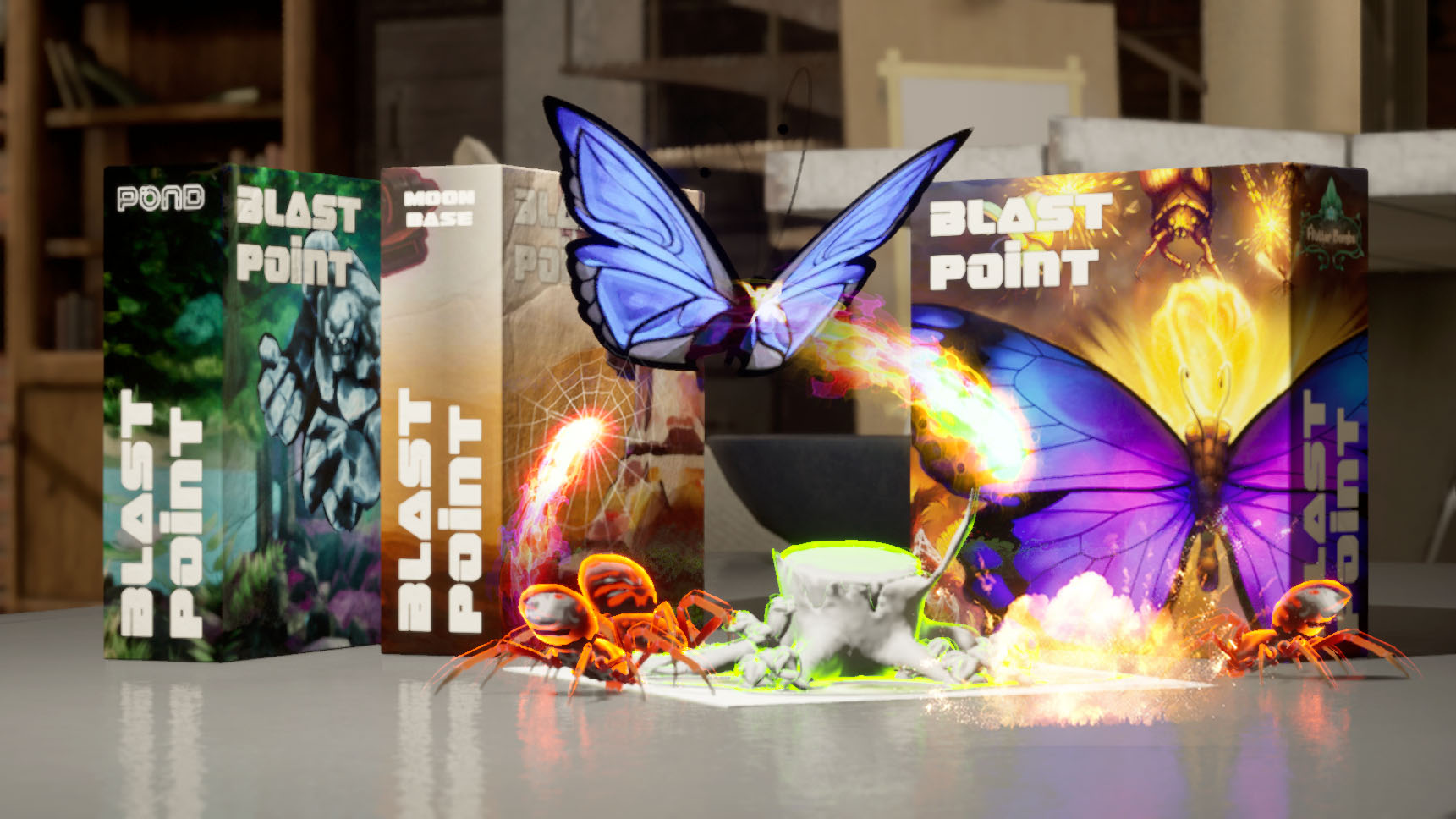 the next game board to be integrated into Blast Point is a pirate ship themed board appropriately called “Shipwrecked”. here are a few shots of how the board is being developed. 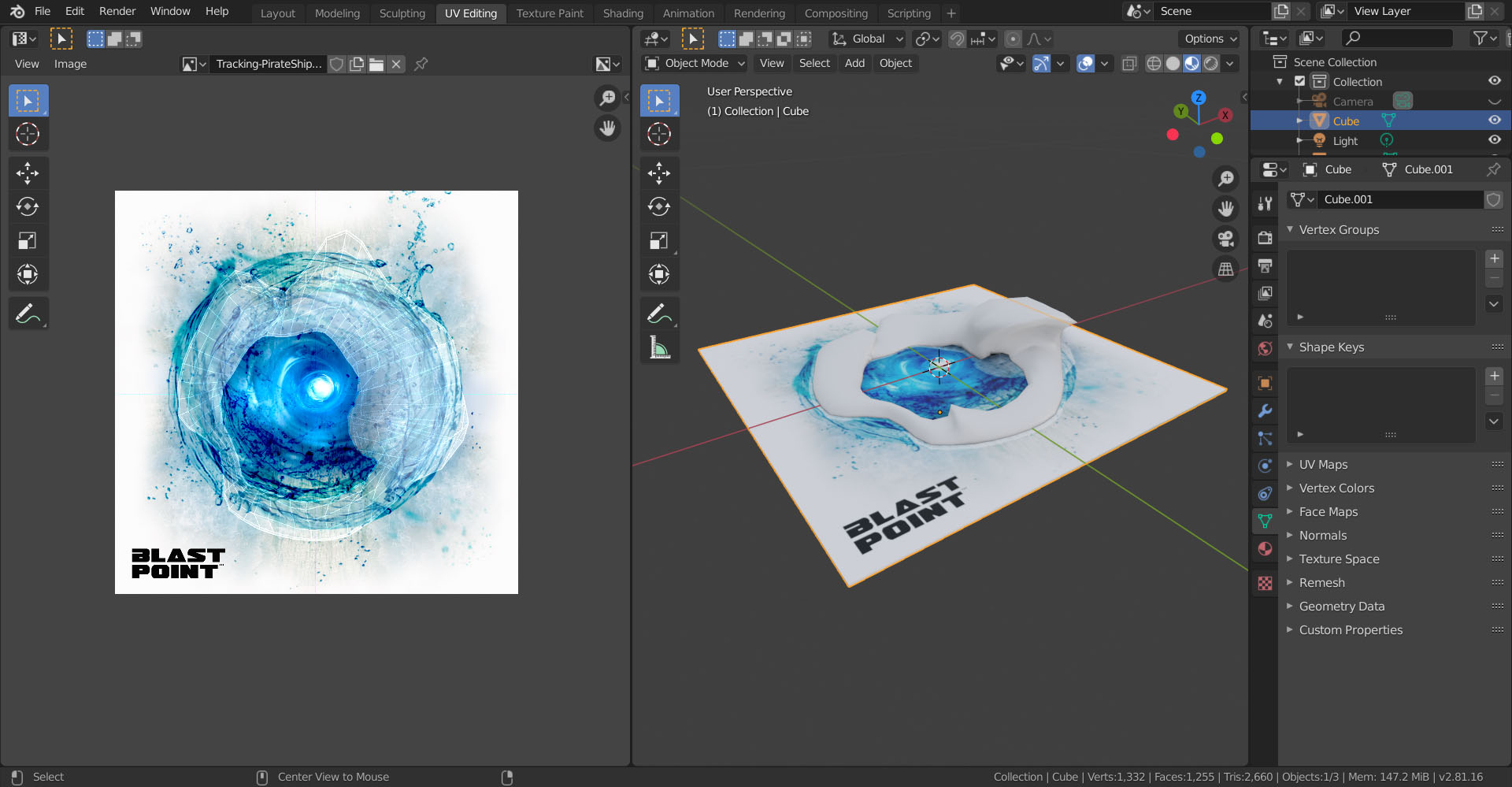 the wave is a work in progress, and will be the 3d printed portion of the game board. 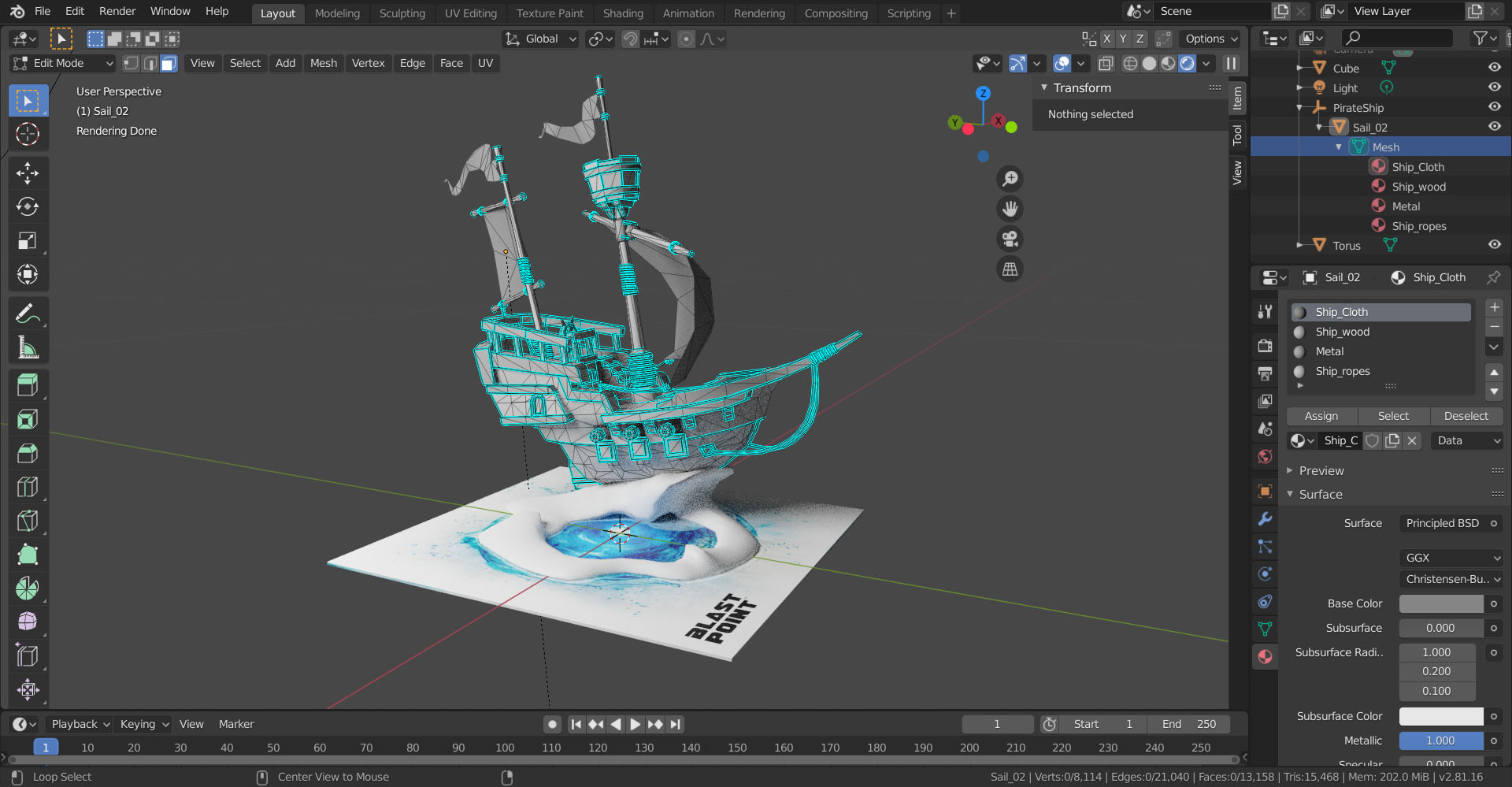 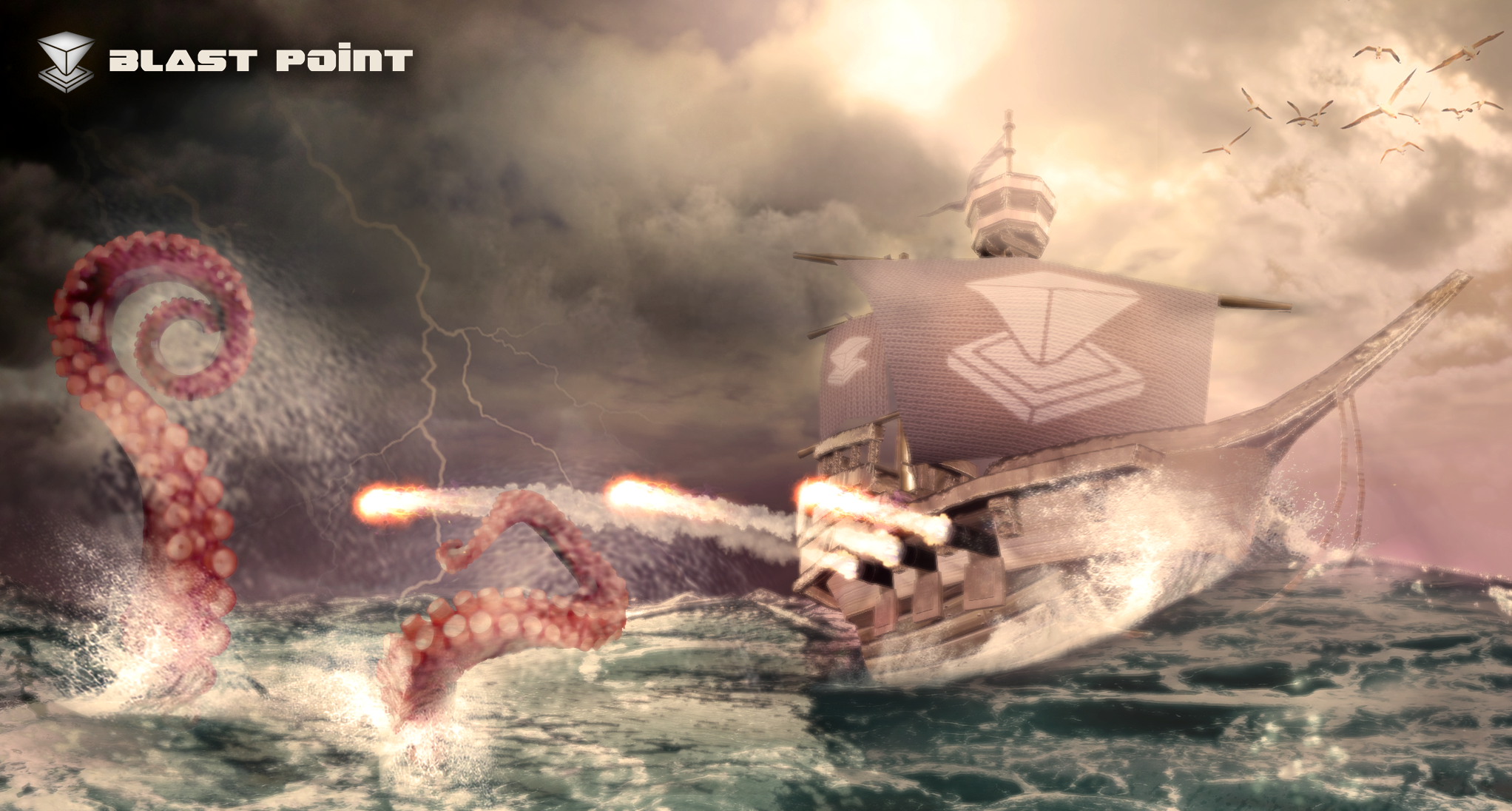 the game board needs a splash screen for the board select screen, so after unwrapping and texturing the ship, i put together this image which is partially in UE4 and then composited in photoshop.

the next update also includes bug fixes and improvements to gameplay, including a new puzzle sequence for Pond that involves putting the stones of the earth elemental back together when broken.

Now have five game boards up and running. For this part of the process, there was some art overhaul, and…Dragons! All five models have been textured and most of the geometry has been rebuilt and optimized both for game use and 3D printable optimization for people playing with a physical game board. The big challenge here was actually just learning Blender in more detail, but that proved quite easy. Migrating from 3D studio to Blender was a difficult choice, but significantly helped monthly overhead regardless of the learning curve. Most 3d programs seem to do the same thing anyhow with slightly different wrappers or syntax. But anyhow, Pond has completely new art that is more in tune with what was published on Oculus Go (Pond has a VR companion app). Dragon’s Temple has been added and that name is probably just temporary. next steps are the iOS update, and then level-up options/upgrades with additional enemies to increase the gameplay challenge. 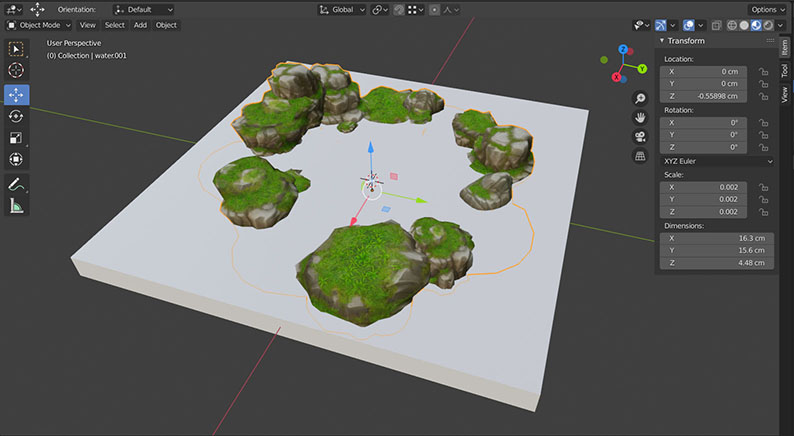 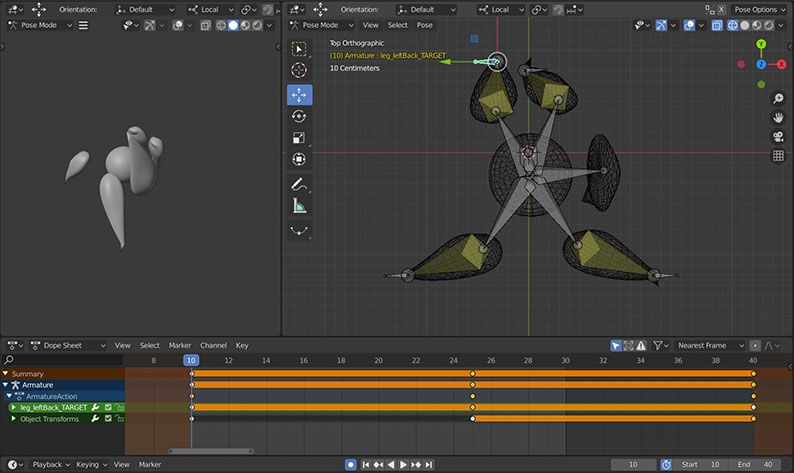 learning IK in Blender instead of 3D Studio 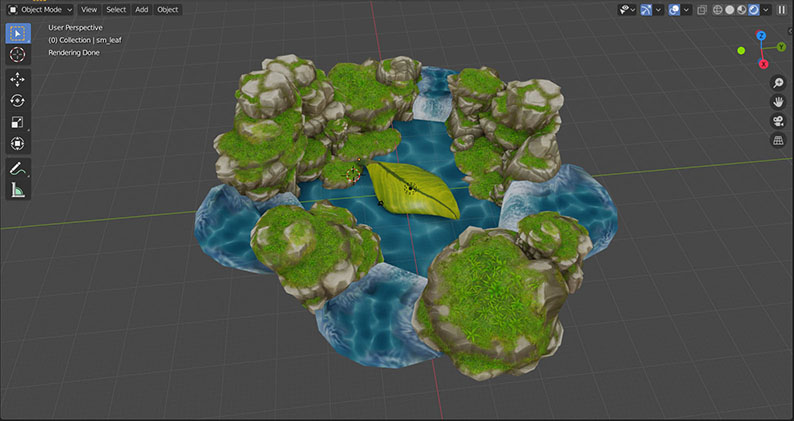 creating a clean model with logical seams took awhile. half of this model was kit-bashed but then needed to be modified heavily to remove unnecessary verts 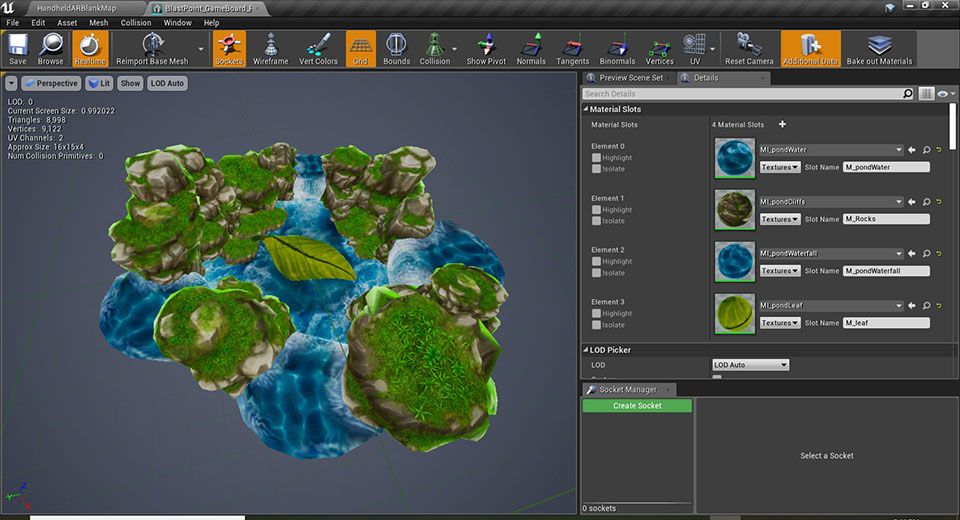 brining the model into UE4. most of the models in the game have only one material channel, but for Pond I went with 4. Four draw calls for this model is a lot on mobile, but that’s why i went through and cleaned as much of the model as possible. runs ok on an S8, so more recent devices shouldn’t have an issue with it. I also wanted to include separate channels for the water falls, but i haven’t animated the water yet. 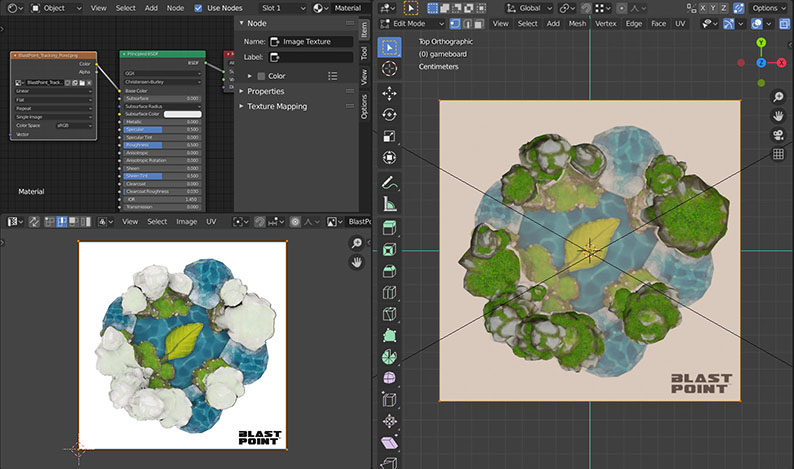 building the tracking marker image is a combination of photoshop work and 3d work utilizing the physical / virtual divide handled earlier in the process.

Wrapping up development on the upgrades for Blast Point! Each augmented reality board has three offensive and three defensive upgrades that can be activated with skill points earned from XP in game. There are also now six different enemies in each board that get increasingly more difficult as players progress. Here are a few images from upgrades development.

Some gameplay at ‘Shipwrecked’ level 30 with all six upgrades activated.
https://youtube.com/watch?v=QrXfYgXHgCA

A diagrammatic look at the ‘Shipwrecked’ upgrades:

Had some fun creating the opening animation using sequencer for the Blast Point marketing campaign. Finally got the upgrades and IAP’s online in the app stores.

Blast Point has been a lot of fun to bring to fruition since the Global Game Jam back in January, in that much much missed pre-pandemic world. To take the game to the next step, i’m aiming to kickstart the game to fund the creation of physical gameboards that will serve as anchors for multiplayer battles. To illustrate the concept, I continued to use sequencer to animate the various cutscenes that describe the different play modes. Here’s a look at the game overview with proposed multiplayer battles. For anyone interested in the kickstarter, the pre-launch page can be found here: [Blast Point Augmented Game Boards (Canceled) by Hadar Silverman — Kickstarter