BitUp is a side scrolling, exploration Hack-N’-Slash game in a 3D-Impressionist world. A game kept hidden by its legendary creator, while its protagonist looks for answers.

This is the only statement I will make regarding BitUp: It’s a mistake. I have decided to stop its development and leave the industry altogether. The decision comes out of personal motives.

Hi everyone, My name is Martin Melendez and I’m speaking on behalf of the Cosmogonia team. We are a team of 7 working on our dream project. The team has worked together in the past in a couple other projects using UE3, but now we are working under a new banner and using UE4! We would love hear back from the UE community, so feel free to discuss any aspect of the game, wether is code, shaders, art direction, gameplay, etc. 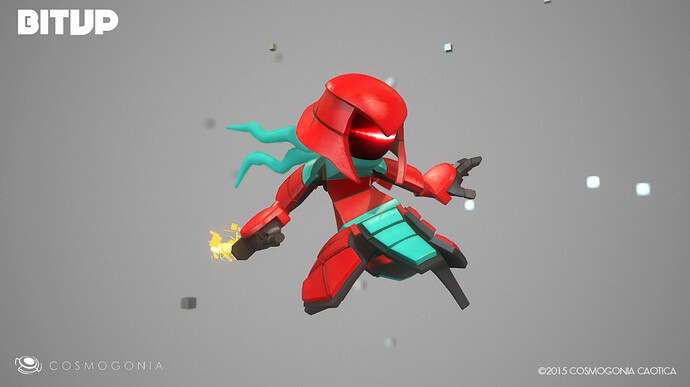 Inspired by early 90’s action side scrollers and late 90’s adventure games, players must aid Bit in its quest to find out what lies beyond. The game will feature a Hack-N’-Slash gameplay inspired in games such as Samurai Shodown, coupled with item collection mechanics that reward exploration, a nonlinear level structure with tons of hidden content, and Cubist-Impresionist look inspired by early 90’s games, but as seen through the eyes of the habitants of the digital world.

This is one of our earliest concept art pieces that defined how we wanted the game to look and feel. 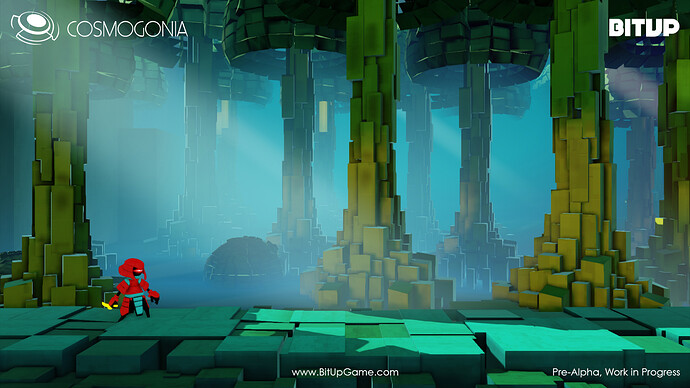 And this is how the game looks right now in engine! We have been working on a custom shader that will allow us to quickly set the look of the scene, so that we can later add in details by painting over the geometry and using additional textures. The screenshot depicts the look only using the custom shader and lighting. 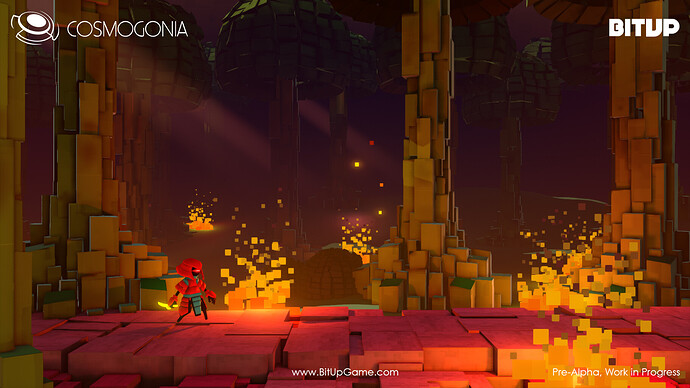 And now we set it all on FIRE!

We have a devlog at http://www.bitupgame.com/blog/ where we have been posting updates on the development of the game. We have already a couple of post talking about the process of creating BitUp’s shading and lightning and setting up our project on UE4 We will be updating the blog and thread regularly, so keep an eye out. I will reiterate that we would love your feedback and we would love to engage with the rest of the community, so let us know what you think!

Would like to see this running in a video.Loving the art style so simplistic using cubes,i love that.Very nice:)

Hi everyone! We have a new blogpost where we write about how we came up with BitUp’s look and feel.

I really like the look that you have so far, very minimal yet eye catching, i’m sure it’ll look even better once you paint over those texture, it shouldn’t be hard to get a result very similar to the concepts

Keep up the good work

The art style is really nice, be good to see it in motion.

Hello fellow unreal devs! This week we have a sneak peak at the animation of the smallest enemy of the bunch. We explain a bit of what happened behind the scenes while animating this particular character.

Getting ready for a ground based attack

Now take a look at the aerial attack mode

Wow! The blocky environment design reminds me a bit of Resogun (that’s a good thing). I really enjoyed your blog post on lighting. Looking forward to more.

Hi everyone! Now that the E3 dust has settled, we bring you a small blogpost about how are we tackling the animation and gameplay from a programming perspective. That means lots of machine-states. 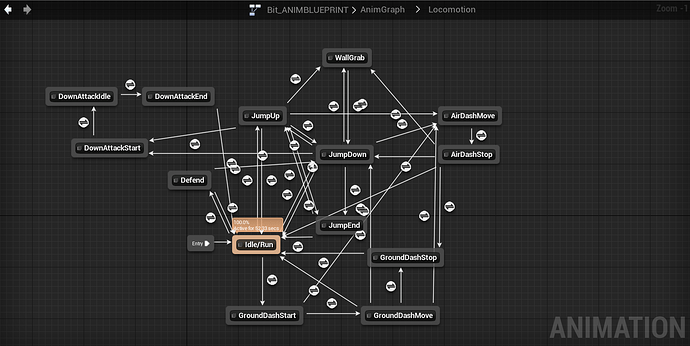 As usual, we love getting feedback from you guys! Let us know what you think.

Hi again fellow Unrealdevs! We have a new update regarding our approach to lighting using Unreal Engine 4.

Tell us what you think

@1STANCESTOR: It got a little bit more complicated these past week XD, but it would certainly be simpler if you could have a “any state” transition. Once you get the hang of it is great tool, our animator is the one that tunes transition times and so on, it helps to give control to the artists and take off work from programmers XD.

Hi fellow UE4 Devs! This week we are showing a glimpse at the attacks of another of Bit’s foes: The Swordman (not a final name).

To tell you more about it, Josh, our lead animator wrote the following:

I’ve returned from the shadows! Me, Josue, the animator, present to the world a brand new enemy in the BitUp universe! The mighty Swordman! (Yup, we still suck at naming work in progress items :P)

You have already met the Minion a couple moons ago, and you got a glimpse into the behaviour we want enemies to have. We don’t want moving cannon fodder, as we are making enemies have a purpose, a mission: put an end to Bit by any means necessary.

By taking Dark Souls, my newest addiction, as a reference, I wanted the attacks to be “felt” by sight, so you can prevent the force of the impact and decide if you want to evade or block. By having good visual cues I expect players to have an window of opportunity into defeating them… although I hope they rip you apart

Enough for today! I won’t spend any more time with you mere mortals! I have and Archer to polish!

Thanks for the feedback guys! Keep it coming!

Hi guys! This week we bring you a first look at the miniboss we are including on the demo. What do you guys think?

The harbinger of death, the architect of the pain on your soul, he whom feeds on dreams and hopes… Heavy Mini Boss 1! (Continuing the streak of lame codenames).

This is the mini boss encounter that will be featured in the demo we are currently working on. We wanted to design include a hulking enemy that used swift attacks, making sure you put into practice all the skills you acquired trough the demo. I love how the enemy turned out, and I’m sure you will like it as well (although most likely you will hate his guts when fighting him).

This enemy is brought you by long Dark Souls sessions and the constant refinement of his movements. This guy sure is special

Keep it up you guys. I just got a chance to read your blog about the state machines. It’s always interesting to see how other teams are managing that divide between accessibility for the artists and simplicity for the dev.

We have a quick update this week, but that doesn’t mean is small! A lot of you have been asking us to upload a sneak peak at the game in motion. Here we have something for you to scratch that itch. Remember this is all a work in progress and there’s a lot of things that can change between now and release

Music by Morusque and sound FX by Etienne Marque