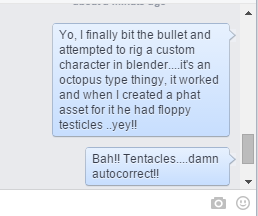 On another note, rigging in blender was much easier than I had anticipated…Now to learn animation

Puts a whole new light on the Octodad game.

Haha, that’s too funny. I had to turn off autocorrect on my phone for that very reason, too many slip ups. =P

Auto correct needs an auto correct for itself. And Testicles! That’s so funny! It Almost belongs in a Flying Circus sketch! (if they had phones)

My phone corrected genius to genitals once. You are most definitely not alone.

My friend never replied…I think I scared him away

My friend never replied…I think I scared him away