I would like to add a reloading animation using blend spaces so only his upper body animates. I want the character to be able to reload while Idle/Jogging/Crouching/CrouchWalking

In the animation blueprints I know how to do this for each individually but the problem is then I would have to connect four different Reloading states that are all nearly identical, one for each different lower body state. Is there any way for me to just have a single Reload state like in the picture below? 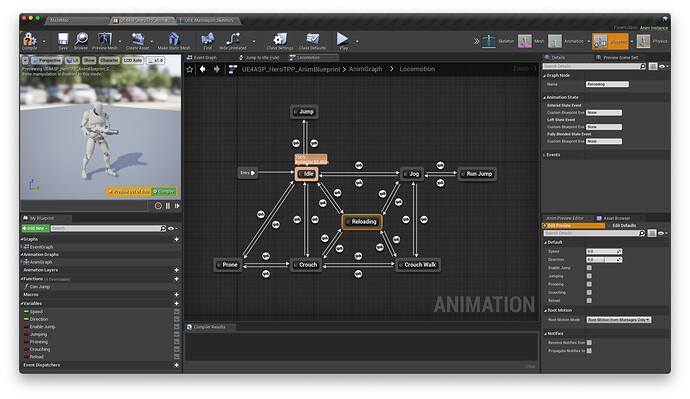 If it is possible I just need to know how to set up the blendspace where the first Base Pose is a variable for whatever the previous animation pose was. Let me know if I need to clarify anything here, I can send pics if needed.

Well the issue with using a state machine in this fashion is it’s reactive to state changes while an event is triggered and then resets if the state changes. For example if running forward the state will change if you press move right. The problem with introducing a reload with in the migration pathway is the reload will only be active “while” the reload is being pressed but if the migration path is reset will stop before the state fully plays out.

How action states are generally played is you would, in this case, press the reload and it will play out until completed no matter the current locomotion state and is usually done is through the use of layer blending and the action done using a Montage and a Layered per bone nod.