Behavior Tree for an other purpose : game state and transitions

I was wondering if I should explore a way to use the Behavior Trees & CO to put in place my game states and transitions.
I know they should be devoted to the AI Controllers and Actors but they also seem perfect for this other purpose.

Is it worth a try or should I keep it simple and just Blueprint my game states and transitions ?

Thanks for your advice.
BTW I couldn’t find any posts regarding this request although it was mentioned somewhere that someone did something like that.

Why would you want to do that?

Sorry after reading my post I realized it was too vague and unclear.

My casual game will have a 3d UI (no widgets) to stick with my theme.

I was wondering if it could be a good idea to use a Behavior Tree and CO to manage the composition, transitions and animations of my 3d UI interface. It would be responsible to animate the transitions between screens (actually removing in a nice way the 3d objects off the screen and showing the new ones for the new screen - might not be a problem if the Level is the same during the whole game as it is a little game).

Thanks for your feedbacks
frank

A draft of what it could be (really a draft)

I played with this idea a bit. It is trade off.
easier to make multiple branching algorithm, code that has a lot ifs and thens or case of is much better and smaller
but connecting all that you your game is bloated and mess.
However you can make some nice and tidy library of services (for behavior tree) and then use that all

I did that around 4.7 so probably now behavior trees are much more polished.

ps. running behavioral tree out of blueprint is a bit clunky, also was asynchronus/ran separate from blueprints.

I have played around with the Behavior Tree and I think I won’t use them. I will create a BP Screen Manager Class to manage the screens. This class will communicate with the 3d UI elements. 3d UI elements will derive from a base class implementing functions or interfaces and hence manage their visual life cycle as autonomous entities when requested. This should spare me the Italian food syndrome.

Behavior Trees could have been fine but there are too many dependencies inherent to their use.

Here is a small glance at my test sample. I think I can do better and cleaner with BPs.

In my opinion Epic should make Behavior Tree a bit more generic. It would be great to be able to use their power in other contexts than AI without having to struggle with their dependencies.

Thanks for your comments.
CYA
frank

Why would you want to do that?

did you ever made a game at all ?
there is no BT for game states and it sucks 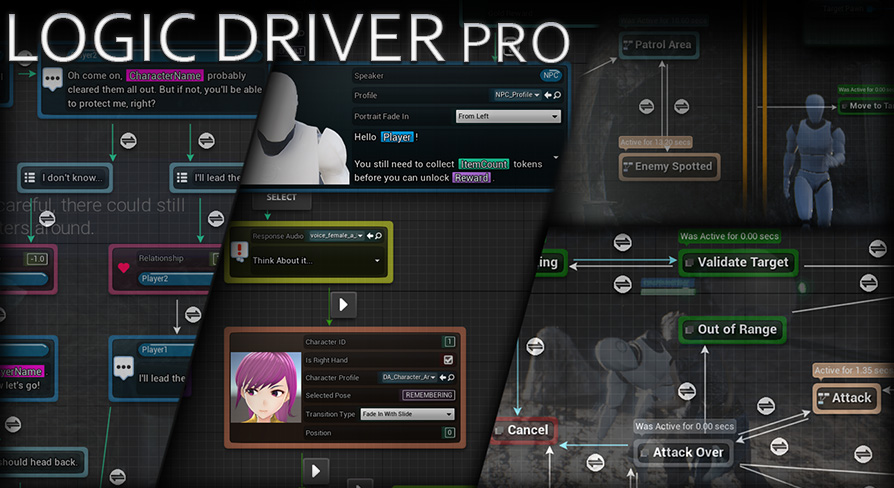 did you ever made a game at all ?
there is no BT for game states and it sucks

You don’t need a BT to manage Game States, because 1) there isn’t that many states to manage; 2) Game State is controlled directly by the Player(s). But, I can see where a BT Flow Graph Editor being useful for organizing the flow of execution. You can sort of hack that with standard BP by straightening BP node connection wires. That Logic Flow System is very nice. I sort of hacked one using AnimBPs incorporating Logic Vars and sometimes dummy Skeletal Meshes & dummy Animation Sequences for Timers.