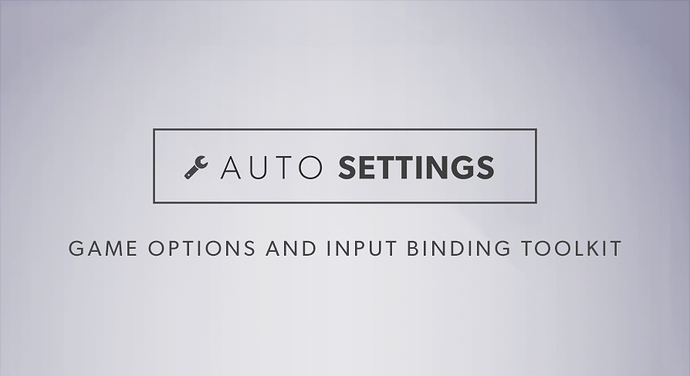 Drag into your UI and turn any console command into a setting.

Auto Settings is a comprehensive and highly configurable game options and input binding toolkit for Unreal Engine 4 that supports a range of functionality that is standard in modern PC and console games.

It is designed be as fast and simple as possible to use, building on top of and enhancing Unreal’s systems so that it is painless to integrate with existing projects.

Using this plugin to create settings and input binding menus requires no code and even no blueprint nodes, simply add the plugin to your project and start placing widgets in your UMG menus.

I try to support as many possible options that developers might want out of the box, and plan to support this with new features that the community needs.
If you have any questions, issues, or feature requests please let me know!

Input-related logic has been moved to a new module called AutoSettingsInput. This should be a seamless change from Blueprint, but module and class names may have to be updated if you are referencing input-related plugin API from code. The new Input module also has its own page in the project settings, which is migrated from the existing page automatically.

Hello, It seems the new update makes every project that has Auto Settings Enabled prevent all inputs from working. I’ve tested this on 8 different projects and it does the same thing but if I disable Auto Settings and restart UE4 inputs work again. Help?

Please try the recent hotfix, sorry for the inconvenience.

Thanks for the quick fix!

Hey would it be possible to get a build for the UE5EA? I’m currently working on a project with Unreal Engine 5 and I’d like to get the settings menu over and done with (preferably with your plugin). I would try and build your plugin, but I’m not sure if there’s any source code to build from that you’ve made available. Thanks in advance!

Hey there, you should be able to copy the plugin from the engine it’s installed in into the project or UE5 engine, and remove the EngineVersion line from the .uplugin file.

Hey, thanks for the help! While I did have some trouble at first (a bunch of compiling errors and whatnot), once I put it into my actual project instead of UE5 itself everything just suddenly worked. Either way, everything works like a charm and I’m quite happy to have learned that you can even do this in the first place. Cheers!