Audio isn't playing when I'm outside of attenuation range.

I have a level with 4 different audio components in it, staggered across the level. All are looping the same song, but each one is playing a different instrument’s track. I need all 4 of them to be synced up, but it seems each component only begins playing when I’m within its attenuation range.

The odd thing is, each of my sound waves’ virtualization mode is set to “Play on Silent.” So they should be playing no matter whether I’m in range, right? And it’s not like I have a million sounds in the level. Aside from these four, there are maybe three other audio components in the level, so I shouldn’t be maxing out my audio channels. What gives?

How are you playing the sounds, can you show a bit of blueprint?

( there’s a lot of different ways ) 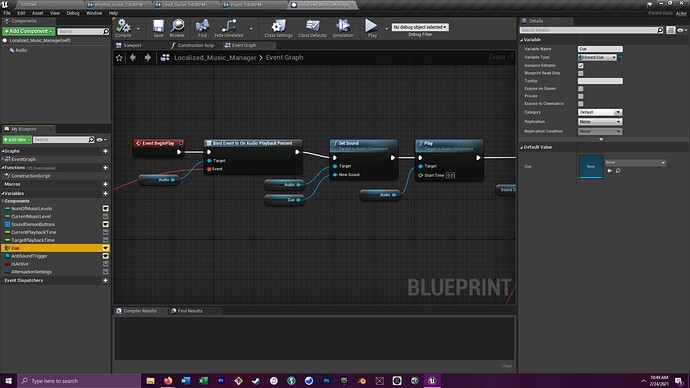 Ok, bizarre. I can’t even get that play node to work.

Say if you particularly want to do it that way for some reason, and I’ll have another go.

In the meantime, my two favorite methods are: 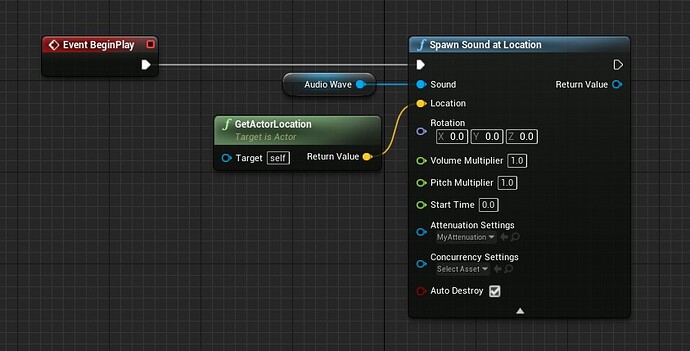 notice the attenuation is set there, the settings I was using are:

That has the exact same effect as the Play node. The sound only starts playing when you enter the attenuation radius.

It seems to virtualize the sound correctly after you enter the attenuation radius once (i.e., if you leave and come back, the music is all still synced up). I might try spawning each sound at the player’s location (with the volume at 0) and then moving them to their actual position in the level.

I’m having the same problem. I added sound attenuation to a video that was playing on a plane, but when the player exits and re-enters the radius the sound restarts and is not in sync with the video. Any ideas on how to resolve this?

With this code ( probably any code here ), once the sound starts in sync, it will stay in sync. The problem is starting it when the player is out of ear shot…