I am trying to to achieve the following hierarchy:

In other words: My pawn has a mesh-representation, and my scene component A also has one with B. I use the following code to achieve this in the SceneComponent A:

Where UstaticMeshComponent* mesh ist the pointer for B. I initialize it in the constructor:

This is the result: 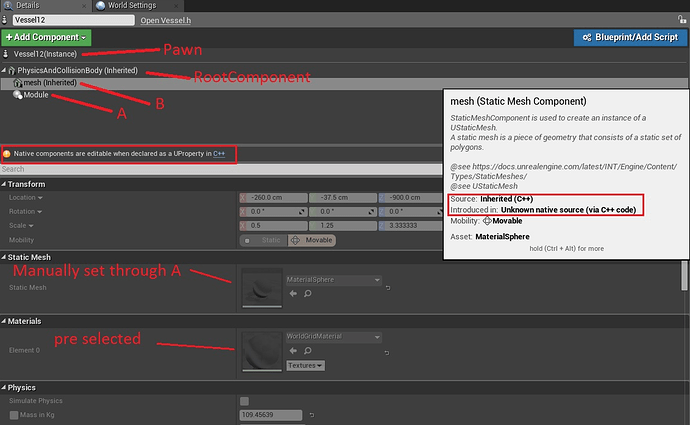 Both A and B are children of the RootComponent, not B child of A. I can edit the mesh of B through A (were B is accessible and editable), but not its material. When I select it I cant change its properties, because the engine says it is inhereted and must be declarde with Uproperty (which I did). It does not render in editor, but when I hit play it does. When I hover over it, it says “Introduced in: Unknown native source (via C++ code)” which makes absolutely no sense to me.

mesh->SetupAttachment(Module);
is what you are looking for.

I should have closed this question a while ago since I found the answer, but yours is of course correct!
One thing to add: SetupAttachment(Module) only works for components that have not yet been registered by RegisterComponent(). If it has been registered, one has to use AttachToComponent(Module)