Attach the player to a socket inside a blueprint. Driving me insane! Please HELP!

Ok, let me start by saying that I have looked around SO MANY times for a solution to this so it’s not like I have tried my hardest but here I am as a last resort.
So, this is NOT to be confused with the common “attaching an object to a player socket” that IS NOT what I want to achieve.
Here is the problem…
Let’s say I have a roller coaster train mesh that is attached to a pre-generated animation to make it move, that’s fair enough, that works fine. Now, to get the player to attach to the train and move with it and rotate, upside down, left right, basically whatever direction the train moves in…I would have to have a socket in the train for the player to attach to right? That’s fair enough, that step is done…
This is where the road ends :’(
No matter what I do, I can not come up with a method to get the player (lets just say the default UE character) to attach to that socket…on a key press…in that train blueprint…and move and rotate with it. NOTHING! and it has been stressing me out for months.

Like I said, I have tried researching this for so long and had no luck. This is my last resort and I am HOPING that someone out there knows exactly what I am trying to achieve and can explain the method and possibly show me a blueprint example so I can visualize the solution??

Thanks to anyone who can help

The project has multiple camera modes including a 3rd person. AThe project also is multiplayer. Both of those factors require the player body to be seen entering the train

At first i thought that maybe these settings would fix the issue regarding the rotation of the character: 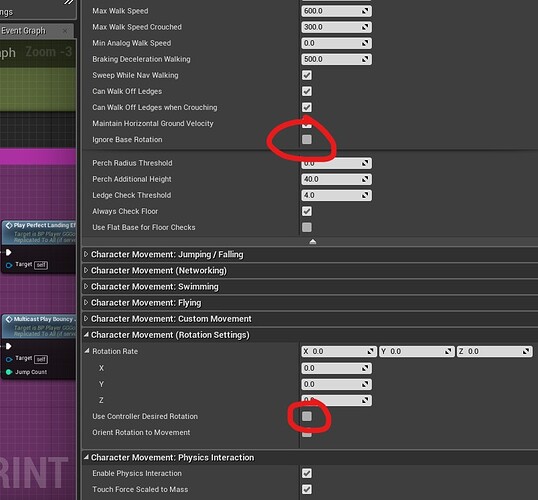 But then i saw that you want it to follow the train even if its upside down, this might be a problem because even if you manage to attach it, i think the character is still gonna try to fall down and might not behave so good.

Maybe a better solution would be to make it so the character falls to the directino of where the train is if he is on it, could be worth to look into. I think i’ve seen a few gravitation change plugins or tutorials around where they’ve made it so you can walk around a planet etc. I’d recommend checking those out!