I am kind of stuck at a problem I ran into. I want to attach my Weapon Blueprint to the Character Socket.
.cpp

The problem is that Unreal obviously does not find the Socket which I attached to the Skeletal Mesh in Editor. 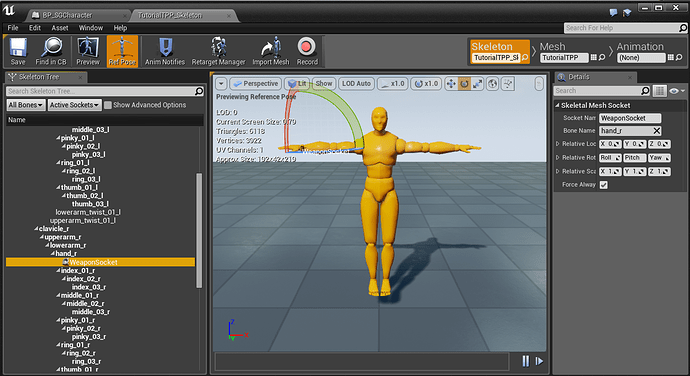 The engine always attaches the weapon to the center of my character.

When I print the Variable on Screen in Line 5 I get the Name “SkeletalMeshSocket_0”, which is obviously not the name I gave the socket but seems to me like some kind of intern name?
What really bugs me is the fact, that when I build the same structure with blueprints it works perfectly and the weapon snaps to the selected socket.

So I just want to know, did I miss something in code or is this some unreal related bug?

I just use the actual name when attaching to a socket, i.e.

That was my first attemp in doing this and it didn’t work. Its the reason why I tried to get the socket name with GetSocketByName().

Thanks for the advice. That was my first attempt in doing this and it didnt work, so I tried solving it with GetSocketByName()

look at the 4th line

Oh, I am such a blind fool! Thank you so much, worked perfectly!

Well spotted on the GetMesh().