This rig allows you to create new animations for the mannequin character, and, from that, also use UE4 retargetting to use other characters.
You can also change the mesh of the character, and your new character will be compatible with mannequin animations becouse the skeleton will be the same.
The video its on blender 2.76, it WONT work on other version, the fbx exporter changed in this version, allowing for this to be made.
The animation pipeline its still pretty shaky, due to how blender handles the NLA and Actions for animations, and how they get imported. You can assume that each blender Action strip will be imported into its own animation file, plus another track of whatever plays when you press the play button in blender.

It works by having actually 2 rigs, one its the fbx imported one, wich is the one we export back, and the one the mesh its attached to. That rig its completely unusable, so i created a new rig, wich is the Control rig, used to actually do the animations. The deform/FBX rig its constrained to the control one, so by editing the animating with the control one, the other gets the animations too. Dont worry, the exporter bakes the animation automatically.
The rig its very simple for now, just an IK for legs, and no IK for hands. You can edit the control rig all you want, feel free to add better IK/FK controls and other cool stuff to it, remember to share it back with the community. Anyway, i will add more controls to it so its better for animation, but now its usable.

Reply to this message with all the doubts and problems you have so i can fix it.

This is exactly what I need, thank you for this.

This is exactly what I need, thank you for this.

Glad you are happy with it. I have a updated version im doing with hand IKs and some custom shapes for the IKs, once its a bit better ill update.

Please do mate, that would be awesome.

Is it correct that by default the left and right hands’ respective finger bones aren’t oriented the same way? (They’re flipped 180 degrees around.) 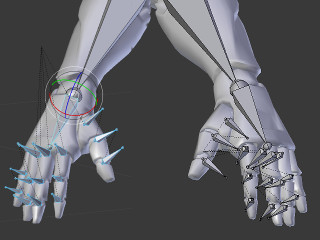 Animating in blender, I often copy bone rotations (via ctrl+c) on one side of the armature and then flip-paste them (via ctrl+shift+v) onto the other side.
The way I do flip-paste doesn’t work with this rig, but it works with rigify and custom rigs.

This is the way I do flip-paste - with the UE4Rig’s bone rotations at default, I:

I thought it might be a prob with bone rotations. Checking them in edit mode I noticed a couple things:
-Some rolls and envelopes don’t match.
-x positions don’t match (i.e. ).

Maybe some of things is the cause for flip paste not working?

any chance you could do a tutorial to show how to get your own mesh working with this? would seriously appreciate it

This is totally amazing, you are the man for making this!