The crowd is made up of multiple MetaHumans that have retargeted motion capture animation sequences animating them. This was working great until recently, but now seemingly out of the blue every time anyone tries to play the level sequence, Unreal crashes with the following error:

We have also had the GPU crash below occur in place of this previous error on some occasions, alongside the following crash report: 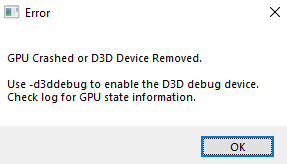 Any idea what could cause this?

Update – after chatting with Jack Condon from Epic it seems that the error is just us pushing the GPU to hard by loading and animating too many MetaHumans at high LODs. Dropping the LOD on unnecessarily detailed MetaHumans seemed to fix the issue.