If you have ever played any of Assasin’s Creed games you must remember the main menu background effect, where lines are dynamically fade in and out with random opacity value at start. 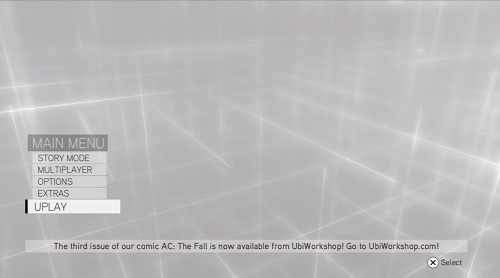 So, I’m just wondering how can I make about same effect in UE4? I’m not searching for a complete solution, but at least for a direction to dig in.

In my game I want to create effect of this kind for a floor in a level (the floor is flat) so maybe it’s some kind of animated texture? If so, how (what software) is used to create these or maybe there is some nice tutorials out there?

in a photo editor, make a radial gradient from white to black, and export it as a 256x256 png. import it into ue4 and create a material from it. in its material properties, set it to surface, additive, unlit, 2 sided, and plug your texture sample gradient into the emissive input. you can plug a panner node into the UV input in your texture sample, to make it scroll along the Y coordinate, and before you plug it into the emissive, you can use a multiply node to double or triple the brightness, making it glow (depending on post processing bloom settings)

in your modelling program, slap that texture on a square polygon, then stretch that polygon to be 50 times taller than it is wide. duplicate that, and rotate 90 degrees around the Z axis, to make a cross shape that can be seen from any angle. make an array of those, repeating 50 times, then combine all of those into a single mesh. make 2 copies and rotate one of them 90 degrees to make a grid, and rotate the other 90 degrees orthogonal to the grid. keep making copies until you have long lines running down all 3 axis. combine all of these into a single mesh, and then randomly select some of the lines, and offset their uvs vertically, to add variation to the panning effect.

add a distance fog and post process effect with bloom, and you should have a near identical effect to assassins creed brotherhood’s menu background, using nothing but a static mesh grid with an additive panning material.