Hello, you can call me Pancakes! I am making a role playing game about the memories I have of being with my best friend years ago. But instead of being humans, we’re going to relive some of our experiences as ‘special beings’ with amazing powers, along with some made up events along the way for fun. My friend is the girl and, yes I am the fish-head. blub blub The name I have set aside for this is ‘Aspect Mazoku’, and that is because portions of the battle system’s mechanics were inspired by the anime YuYu Hakusho in which, spoiler alert, the main character is revealed to be a member of an ancient race of demons referred to as mazoku.

As far as game development skills are concerned, I am basically not very good at anything, and yet I will try to do it all. I’ve already spent a few weeks with Blueprints coding the core math behind the game’s battle system. So what’s next is to make some graphics, music, and animations and other things as well. Basically I’m just getting started.

I am very thankful to Unreal developers for making the best game engine ever created available for free. Actually, I kind of needed that at the moment. My intention is to make a demo within the next couple of months in order to showcase the game’s battle system in action.

But until then you can have a gander at the two character designs for the demo I was talking about. Still very much unfinished. I hope you will see a big difference between how the models look now and how they look inside of the finished demo. Thanks Epic! 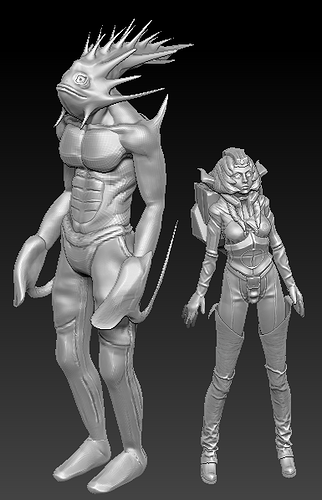