As an individual how far i can go with ue5?

i just started learning how to use ue5 (through unreal sensei 5 hours tutorial) but I’m curious how far i can go after learning ue5 and it’s blueprint? so here’s some direct quiestions:

1-can games made by ue5 run on low-end PCs?
2-do i need to learn mobile games on their own or are they the same as pc? (regarding tools , navigating, and blueprint)
3-not really a question but i would like to see other peoples’ (solo individuals like me) projects to get an idea of how far i can go

I hope this answers your questions.

Oak The Wise awakens from a 2 year slumber to bless us with his presence.

To see other peoples projects be sure to check out the showcase section of the forums!

I wrote my game from scratch in 2 years, all blueprint ( including learning the engine ).

Definitely no everybody’s cup of tea. But it’s certainly possible.

If I had been inclined, I could have written one of these ‘building’ games that are selling by the bucket load on Steam. But that’s not what I want.

If you strike it lucky with the genre, and are prepared to put some work in, it can definitely be worthwhile.

i’m a few months away from publishing my first unreal game. It’s taken about 6 months of full time work (50+ hours a week, usually 6 days a week) to get to this point, starting from knowing a bit about game making but no programming or unreal experience.

I came from unity, and I prefer unreal because of the robust tool set and integrated visual scripting system. It makes it simple for a non-technical guy like me to do most everything i need to do.

But, Unity is the worldwide engine of choice for mobile games. I couldn’t tell you why because I have no interest or knowledge in mobile games - but presumably it is for a reason. So if mobile games is your thing it’s probably worth seriously evaluating one engine versus the other.

If you just want to learn how to make games in general I think starting out with unreal blueprints is probably the easiest introduction you can get. But if you are dead set on mobile and have certain hardware/platform requirements, you’ll want to look closely into those details and test to make sure that whatever engine you choose, it can meet your requirements.

I’m not the expert but as far as I understand, the major difference in mobile development is you’ll have less memory to play with, less gpu power, you’ll have more hoops to jump through publishing, and testing throughout your development is going to have more hoops to jump through as well. Basically you have more filters that limit what your final product can be, and of course learning what all those filters are is half the battle for a solo-dev whose service rifle is google and you have little other firepower.

Certainly it is possible to make a game “on your own,” but it’s a mountain of work and you have to be clever about picking the right battles to fight so that you avoid burnout or just digging a hole you’ll never get out from.

This is a prototype I made in about a year, completely solo, having zero experience with unreal or any kind of gamedev and working on it only in spare time as a hobby (sometimes weeks would pass without me touching the project): 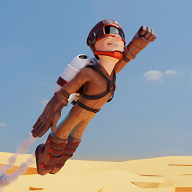 A 3D platformer with a jetpack!

(It’s been now more than a year since I started this project, but the iteration that is available in the link is from about a year in)

Of course, it’s very short, it’s only one level, after all it’s a prototype. Even so, it checkes all the boxes of a technically ‘complete’ game: it’s fully functioning, with mechanics, mini-games, challenges, enemies, objectives, power-ups/upgrades and progression.

If you play it, please leave feedback in the comments.

I created, modeled, rigged and animated the character in Blender. I also created and modeled the enemies (an airplane and a robot) and all the environment assets such as the trees, the crates, the landscape, the platforms… I also created and modeled all items (such as the coins, pistol, jetpack, etcetera…). Basically I created, modeled and animated almost every asset model used in the game.

For the dev part I started from the ‘third person character’ template and tried to customize it as much as I could using only blueprints.

Now I am learning C++ and I’m creating my own character class as well as a custom movement component class so I can have it behave exactly the way I want it to. Slowly but steadily, I’m getting there.

There are many indie solo devs much smarter and more talented than me ou there, making amazing games by themselves. Trust me, if I can do it, you can too.

And you don’t need to create every art asset in the game, there are plenty of assets you can buy or even get for free in the unreal marketplace.

In theory yes, but caution is needed here tbh. So instead, I’d recommend exploring Godot or something easier first before Unreal.

Unless you’ve already decided its Unreal or nothing…

2-do i need to learn mobile games on their own or are they the same as pc? (regarding tools , navigating, and blueprint)

Debating how to answer this… Its quite possible that devs need to be even more skilled / talented to execute well on mobile in Unreal. UE is more of a high-end game engine. So its easier to use it for what it was designed for. Whereas on mobile, you’ll need to know far more or have lots of sneaky ninja tricks to optimize work to run well. Its just too easy to create great looking fun stuff in Unreal that performs badly or even horribly. Trust me, I’m an expert here.

My advice is only do this right now if it inspires you to keep working on your own projects (a kind of muse). Otherwise be guarded, as it can be deceptive. There are amazing demo scenes on the forums right now lining up for a competition. But how many of those will translate into something longer-term like a full-game / film / tv / broadcast/ archviz / engineering project and so on. How far can you go is best answered by asking yourself, how far do you want to go?

Overall even without creating your own assets, the level of commitment needed to get good at Unreal is huge and lots of devs simply give up after a while. Those that don’t are arguably very talented - like me. Er, no

Just the best lookin. Er no.

Just a good sense of humor maybe and pushed by a deeper motivation that only they can understand and sometimes they can’t.

Look above… AUFKM… 50+ hours a week for 6 months. How many people can afford to drop that kind of time on something… Who would even try… What else would even take that kind of commitment?! Its huge… Honestly, its probably easier to just become an influencer and push NFT’s / Crypto or something to FOMOS.

… For now, just find ways to have fun with the tech and see where you go rather than over-setting expectations and piling on the pressure. So just have fun. If you become an auteur then appreciate an invite to some kickin roof parties.

I could work fewer hours but my personality is to focus 100% on one thing at a time. I don’t work out of penitence, I just like to do what I like doing as much as possible, and I like making my game in unreal.

Somebody could do more in less time, or they might do less in greater time. Just adding my experience to the data pool.