I’ve been using Unreal for several years now working as an architect and 3D visualizer.

Today I’d like to show you a passion project that, together with a colleague, I’ve been working on lately: a video animation of an Unreal Engine scene for the 1923 ‘Brick Country House’ project by famous german architect Mies van der Rohe.

I wanted to test some UE stuff without the limitations of commercial work, and I’m a huge Mies buff (my final dissertation in Architecture school was actually about him) so this project sprang to my mind.

The original project consisted only of two or three simple drawings that showed a very minimalistic architecture (for the time) which was laid out as ‘planar’ organic composition of walls. In the 1920s this was groundbreaking in its architectural language and fluidity of spatial concept, with close ties to modern art movements like De Stijl, for example. 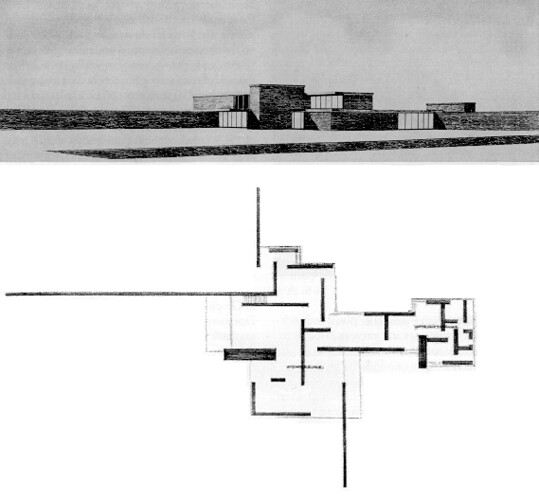 But it was never built, as it was mainly an abstract flagship project to experiment and showcase ideas regarding a new Architecture. So in a sense it’s a very interesting thing to ‘bring to life’ with Unreal. 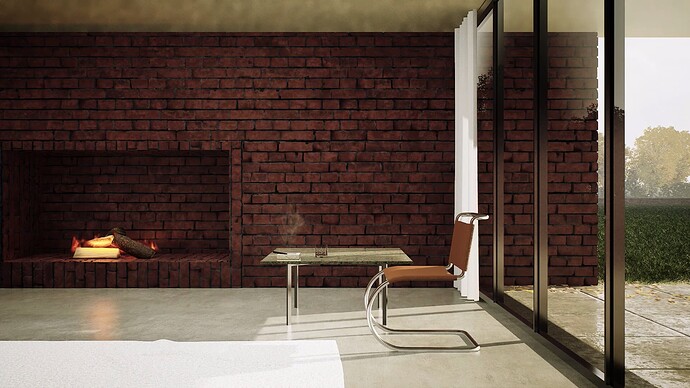 To give it a convincing feeling, we drew heavily on Mies’ actual built work, especially the Lange and Esters brick houses in Krefeld, Germany, which are obvious late relatives of this seminal project. The idea was to make the materials and construction elements as close as possible to what a project built by Mies in the first decades of the 20th century would look like. The furniture choice also reflects this, using Mies-designed models and other contemporary pieces. 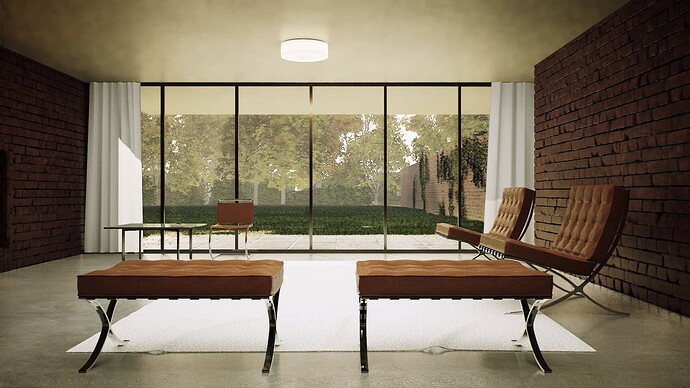 For high quality materials I also used a few Quixel scanned assets, as well as many props from the Unreal marketplace to help set the stage in the vintage time period mentioned above, while trying not to clutter the scene too much. The car is a 1930s Alfa Romeo model by ‘roy-creations’ available on CGTrader. 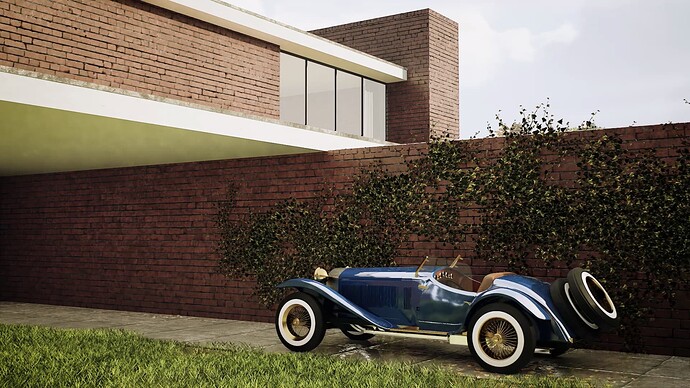 As said earlier I used this as a vehicle to further enhance my understanding of some Unreal Engine’s features, especially realtime Ray-tracing. It was really exciting to see the instant changes in scene lighting and the less work needed in preparing the model for baked lighting. It does raise some challenges with the performance (I’m on a RTX 2060) and I still have same issues to keep the GI noise in check. Overall there’s still margin for improvement I think! 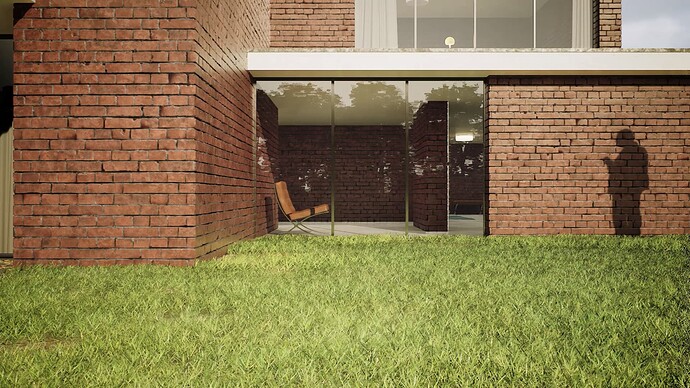 Don’t forget to watch with the sound on (and better yet with headphones!) To help set the mood I worked a little bit with ambient sound effects, along with the music. The idea of the video is to not give everything right away, so you’ll need to be a little patient

Hope you guys enjoy it! Let me know what you think of it in the comments. Criticism is always welcome, we never really stop learning.

If you’re interested you can also check out some of our other work:

Welcome back to Instagram. Sign in to check out what your friends, family & interests have been capturing & sharing around the world. Thank you (and sorry for the long read

First things first, we warmly welcome you to the Unreal Engine Community. We’re thrilled to have you here. As for your actual project, wow! This is stunning and it shows your passion for your art. I adore that you’ve taken your time to explain what we’re looking at here and even gave some background on both the house and Mies Van Der Rohe.
I hope you don’t mind me saying so, but that vehicle is spectacular. I know it technically isn’t the house which is the main part of your project here but it’s so skillfully made. Super impressed

Hope to see more of your work soon and congrats on such a wonderful job friend!

Thank you so much for your friendly welcome and your enthusiastic comments!

TBH I’ve been keen on showing my work here for some time now. As someone who’s worked with UE for years I’ve naturally read a lot of content on this forum, not only for technical reasons but also for the amazing work that many post here. I guess the time has come for me to seek the feedback of the community

I adore that you’ve taken your time to explain what we’re looking at here and even gave some background on both the house and Mies Van Der Rohe.

I appreciate you taking note of my explanations. I figured if people had a bit of context on the project (particularly those not in the Architecture field) perhaps they’d understand a bit better what I was trying to achieve here. But it is always nice to know that someone actually read the whole thing

I hope you don’t mind me saying so, but that vehicle is spectacular. I know it technically isn’t the house which is the main part of your project here but it’s so skillfully made.

Not at all, I too was mesmerized by this model and that’s why I chose it. TBH the credit on it is not (all) mine, since as mentioned above I got the car from CGTrader (although I had to adapt it a fair bit to make it look good in UE).

I thought that the car would make a nice contrast with the planar geometry of the house and to convey a better idea of the era of this design. The vehicle is actually a few years ‘younger’ than the house project itself… So you can imagine how avant-garde this architecture must have looked back then!

Once again thanks and I hope to show you guys more of my work in the future.
BTW, Happy New Year!

Happy new year to you as well!

Looking forward to your next project