and this is in the character blueprint: 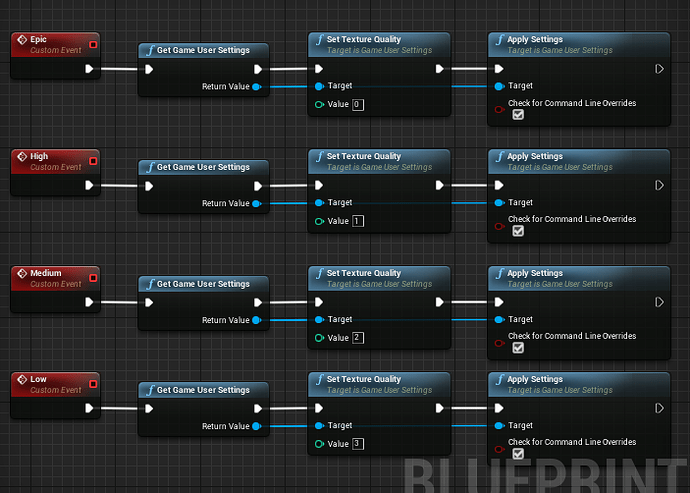 Move it to more global class that does not reset, like game instance, or your own object class (not actor)

thanks for the reply

but it would affect everyone using the same character.

No if you don’t replicate it. Or else you settings to apply depending on character picked?

sorry but i just realized something, maybe it works but i can’s see it. because i’m judging by 2 view ports in the editor, but if it was another computer it would work?

Ok maybe tell me what you trying to do. Most importently why you have this genius idea to put graphical settings in to character class, which multiple instance will be on the map and they constintly will be destroyed and created ;p

as i said i’m a beginner lol. so basically all i want to do is have 4 character BPs and 10 players that can choose any character BP they want and play an online game. and i want to have pause menu settings system and i made a mistake by butting it in character BP, i don’t know where to but it and how. and i tried doing the settings in anywhere other than player controller and character BP but it didn’t effect the player.thanks for your help

sorry for bothering you but i think i slowly got it figured out… i think it’s because when i change settings in a character it changes the settings to everyone using it because i’m testing them all in the same machine (my pc) is this why? i told you i’m a beginner

The code you have in blueprint will always execute on machine regardless who control it or if it’s replicated. So if other character trigger quality change it will effect all clients there is connected to this world.

But i think you doing error somewhere else. Ask yourself why you placing machine related code (you changeing qulity settings) in to character code? how this relates to character itself that you place it there? This is something that should be local (not replicate), somewhere global and effect only machine that is in. In fact i think better place for this would be that widget blueprint then character blueprint, why? UI is not replicated (by default) and it only exists in clinet that it is displaying in, and if you think about it, code for graphics quality is in engine so from the UI you controlling it… this is better then doing this in character that it should do is walk and jump and stuff like and not changing quality of graphics isn’t? So simplest solution for you is to move this code to widget that showed here