Hello. How about improve append string in blueprint. Add something like a “Add pin”. For making one big append NODE instead of many little with only 2 pins.

I’ve wanted this many times!

Try out the Text Format node. It uses FText instead of FString but otherwise allows you to do nice composition like “This {Noun} is {Adjective}” and you’ll get a pin named Noun and a pin named Adjective. 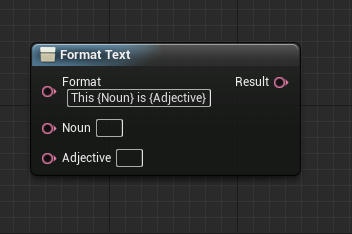 In general for anything you display to end users you should be using FText anyways, as those are localizable, unlike FString. This is especially important for things like using Format instead of Append-ing things, since word order changes in different languages.