So I hired a guy to make animations but he didn’t tell me until after the job was ‘done’ that he actually doesn’t know how to make them work in game.

The animations are all setup in their animation blueprint. I have the event graph setup as it is in this tutorial A new, community-hosted Unreal Engine Wiki - Announcements - Unreal Engine Forums and it works fine.

When I copy that event graph into my own guy, it doesn’t seem to work at all. I’ve setup the anim graph and its working when I click the different preview buttons, all the animations are firing off properly.

I set the BP character mesh to use that animation blueprint in the defaults and then I hit play aaaannnd nothing.

Any ideas why this isn’t working?

not sure if i missed it but i can’t see anywhere in that section that actually calls the anims , don’t forget in the nodes you have to call the anims

I re-watched the videos and realized that I skipped a vital step. The animator had set the animation BP to point to the static mesh and not the BP character we where using in game.

One other question though.

I have all the anims setup and working in the preview, and I have the bp character crouching properly in BP with this: 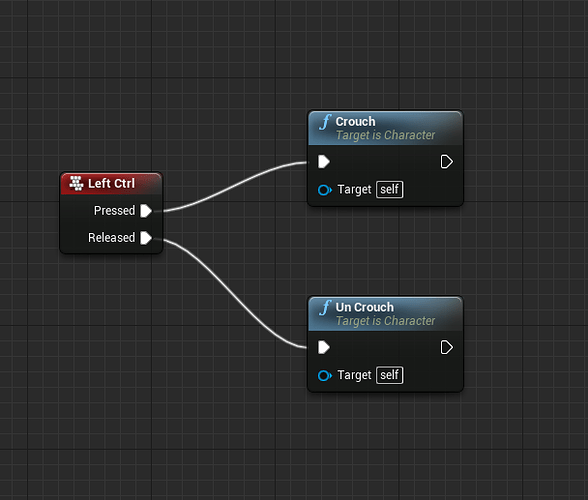 However I have the event graph of the animation bp here and I’m not sure what to add to switch the IsCrouching bool:

With out triggering it in the anim bp, the character still crouches in first person view but the 3rd person mesh animation doesn’t play, obviously. So other players can’t see them crouch. Any ideas?