What would I need to put in the event graph of an animation Blueprint for an A.I character that uses root motion? I’m following the below help and think I have most of it setup but I’m just unsure what goes in the event graph. Ordinarily you would use a speed variable off Vector length but I don’t think that will work here. I tried to find any documentation online but there is very little on the actual set up of the event graph in an anim BP for root motion. I could only find one actually https://youtu.be/4xF7AK4UjMI?t=1746 but that is using a walk blend variable to switch between animations which doesn’t work with the Blend poses Enum Behavior Type

This is the guide I’m following…

“I got it to work. Instead of creating a child of the AI Base character that comes with the AITOOLKIT, i’ve created a brand new character and added the “Behavior Component” and change the controller to “BP_AIC” and the root motion works. But changing animations is very tricky… Because the animations aren’t being driven by the velocity of the character. Instead, you’ll have to manually define when to switch animations. Like if Character is in IDLE, play IDLE animation. If Character sees player while in IDLE and Than goes into SEEK, Play run animation. I’m changing animations based on “Behavior Type Enum” variable, and using a state machine.”

and this is what I have setup so far. 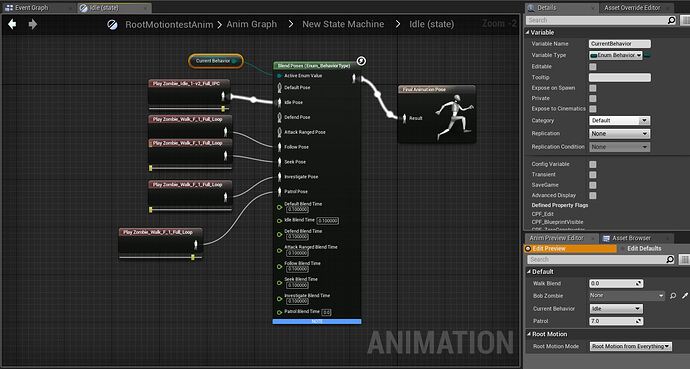 Trying to find out this myself. No one knows an answer to this? Why is setting up root motion with A.I so hard on unreal?

Don’t even try to make root motion AI. You will work hard against engine and in the end it will not work good anyway. You need to code some base navigation systems from scratch to get it working somewhat properly.