Animations for a Sims-Type game?

**I’m trying to make it so the players can select multiple types of interactions with objects in the environments. Like a chair, fridge, bed, things on tables, floors and walls. But there aren’t any good tutorials I’ve found so far on getting the events to trigger the animations.

I’ve been trying to look into things like State Machines, UMG Animations, AnimNotifies, and AnimInstances but they’re all basically about run/jump/crouch movements and not stuff like making a player eat, sleep, sit, or just motion with something.
I wanted my characters to be able to go up to a bed and pull a sheet up, lay in it, cover themselves back up and be able to cancel the animation or have it finish in a certain time but I don’t know how to get an animation like that to be prepared and then start playing. How do I go about doing stuff like this?** 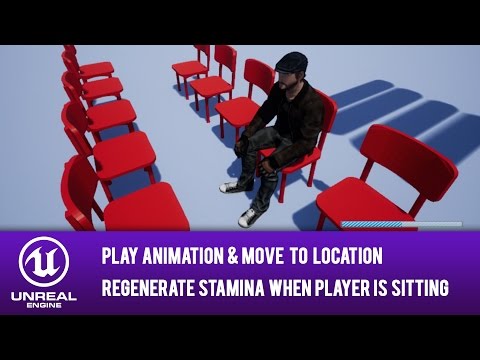 **This video is a good example of what kind of interaction I want, I just wanted some selection widgets to show up before it that would say something like “Sit [plays sitting animation], Eat [Makes the character sit and eat whatever they’re holding]” etc, and instead of the character spinning like a bot like in this video I wanted them to have a realistic movement to turn and sit.

Thanks for checking in!**

Well this is how I would do it. Do line trace to detect the mesh. Check what mesh it is. If it’s a chair point the player at the chair. Do sitting animation. Get up press a key. Repeat.