Animation Speed not matching up with Walk Speed

This has probably been asked, so please forgive me, but I’ve been searching and searching but I can’t seem to find the correct information…

Starting a new ThirdPerson project, there’s a couple of default animations. The animation/blend speed is fed the walk/movement/world speed. The animation information tells me that the walk speed is 93.75 and run speed is 375. But if I change the character max walk speed to 93,75 to do “Walking” then it looks like he’s running in place and the animation loops badly. If I set 375 as the running speed then it looks a bit better, but still not perfect.

I would assume that the animation speed would directly relate to the world movement speed, am I wrong? Is there some secret scalar value? Is the default animations perhaps wrong/bad and I should ignore them and get the other animations from the market place?

at a base level the animation speed can be calculated by placing the animation in blender or a 3d program and letting it play out with root motion making sure your feet do not slide.

This will always be an approximation since people have a different step cadence and no walk cycle is perfect when getting mocap data.

The thing is, in unreal, given the scale of things, an average 3rd person character moves very slow with a realistically timed walk/run. So for the most past people use values that play well and create manual animations to match those speed/feel natural at those speeds.

Anyway, goes without saying that the base animations are trash. There are a few packs out there with good locomotion if you want the cookie cutter solution. If you want to make your own i would suggest mocap if you can afford it, and making them manually if you cannot.
Its a job and with 0 knoweledge it takes a while, but its possible. The result will be better than the default animations if you put time and effort into it. You can also take the default and modify it to be on a specific scale.

To do this you use the same principle. A walk cycle is 24 frames. The speed in unreal needs to be solved to m/s.
Default export being 30fps you can set the root motion on the animation at 30 frames and just discard frames 25 to 30 later. The motion speed will be fine without additional calculations.

once thats set up you just need to adjust the position of feet/hip so that there is no sliding around when the animation is played.

This makes it so that there will be no sliding in unreal when the animation is played at full speed and the character moves at the pre-set speed. Should either condition change the feet will slide again.
To solve that there’s a few ways, the best one is a node that’s been around a lot. You can get it on the marketplace and update it to whatever engine version you are using.
the technique is called speed warping. You can check it out in many of the videos released about Paragon.
an example: 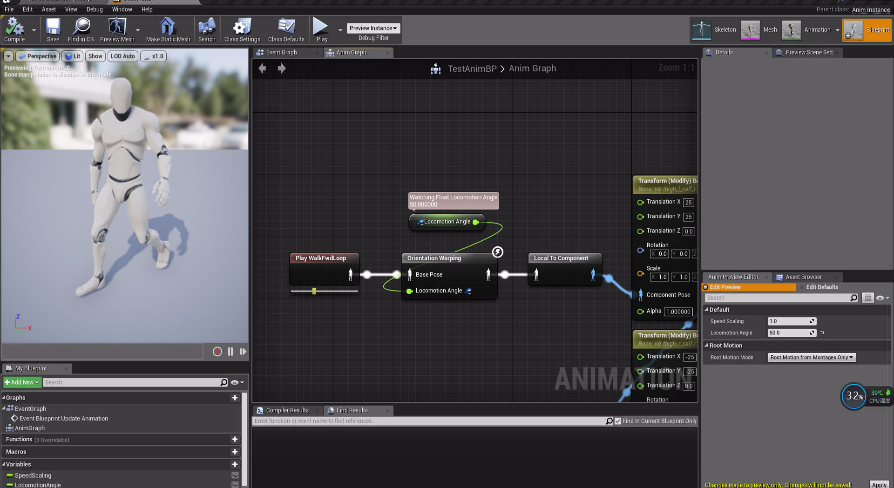 By now there’s 3000 implementations of it.

Note that nearly no AAA game gives a ■■■■ about any of this… Paragon was a good exception and great learning resource for how to do things more properly than most.

Hope the wall of text isn’t too much

Thanks for taking the time and writing out all the information.

I did try the animation starter pack and found out that it had a much better walking animation timed to the speed, but that pack has other issues and is missing some of the default idle animations, jump start & stop etc. The animation bp is also broken and requires work to fix. Certain blends are not working properly due to missing animations. The list of issues just grows.

I just find it strange that they ship the engine with such broken animations, then offer a free animation starter pack that’s also broken.

Creating my own animations might be something to try out, but as you said, I might be better off just purchasing a good pack off of the marketplace. I’ll take a look at the “Custom Speed & Orientation Warping” pack.

The goal I’m trying to achieve is to get a really solid and good looking and feeling animation setup for the character, without weapons and then with weapons. Looking at the packs, bp, etc, everything seems broken or “half-■■■■■” put together.

You probably want to actually invest- either time or money.
ALS, whatever the latest.
or anything that uses predictive animation.

But in the end everything on marketplace is kinda half-■■■■■ for various reasons.
The leading one being the engine version it works with.
The second one being
Animation done right is not a copy/paste or install & use thing. It is usually individualized to a specific character.

If you have resources you can try a mocap suit to get the base animations to modify. It’s about a $1500 cost or so. Hopefully lest by cyber Monday.

Either way, its a process that takes a really long time and more knowledge as you go.

In general purchasing anything from the marketplace generally does not give you what you need and most times adjustments are required. Animations for example give you a good base from which to work from but requires further work to compensate for different actor scale as well proper offsets to counter the constant velocity of the movement component when using in-place animation. As you also found out going from run to walk with a simple speed change does not correct for the gate so requires a state change.

The free animations are not really broken but rather the IK joints were not properly constrained when exported so although rather useless as a direct import is easy to fix using an external application. If you are looking for free animations to play with I would suggest making use of the Paragon set that comes free as part of the character packages but once again requires work to make them work as desired. Over 3000 so worth a look see in any case.

As Host mentioned though “proper” video game animation is something that you will need to invest either time or dollars, more so as to time, as although getting the actor into a state is easy enough but it’s how it moves into and out of the state that makes the different and this is where you have a lot of options as to achieving the proper result.

Just keep in mind that buying an asset generally gets you to 95% of the way to where it needs to be and is why most prefer to make their own.

Long way to say just keep at it.