Animation not rotating or translating

I’m using unreal engine 4.21.2, and any animation that I import doesn’t work properly. The character doesn’t rotate or translate. All of the bones move how they should but for some reason the whole character doesn’t rotate or translate (Is it to do with the root?). I’m fairly new to Game Development (I’m only 14 yrs old) so any help is appreciated. Thanks!

It depends if you’ve set animation keys on the root transform such as if the root is animated to location 0,0,0.

I don’t know what you mean by that. Here’s a screenshot of the settings, is it something to do with the root motion section? 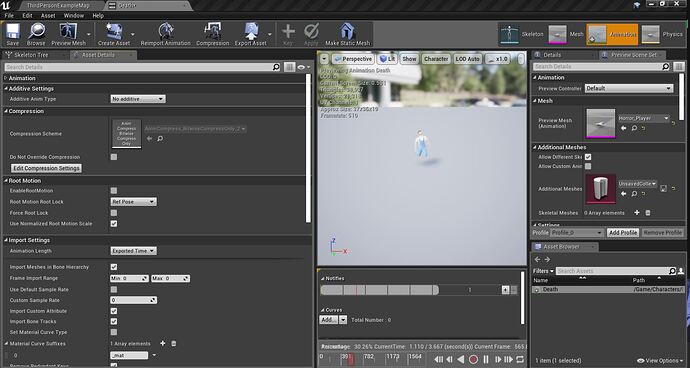 Is the imported mesh assigned as the mesh on a character pawn? The pawn should handle the general movement and the animation should be only moving the skeleton of the mesh. The imported animation doesn’t need to have any keys referring to the root of the mesh.

That’s strange, maybe there’s something I’m overlooking but it’s like it’s being animated from the root but unreal is ignoring it? The only thing I can think of is to reparent everything to a new root in maya, that way only children are animated when imported into unreal.

I have uploaded 2 videos to youtube so that you can see what is going on. the first one is what happens in unreal engine, and the second is how it looks on mixamo (I have also tested that it works fine in maya). The mesh is assigned to a pawn, but I don’t think that matters. Thanks for your help!

Eek! How on earth do I do that? I’ve never actually used maya, I just kinda have it to preview animations in case unreal does stupid things like this. it’s never happened to me before, but could it be because the animation was in .fbx format? maybe unreal doesn’t like fbx animations. I just don’t know.

“maybe there’s something I’m overlooking” Yep, I missed that EnableRootMotion was false and it needs to be true.

The unreal documentation explains root motion “Put simply, Root Motion is the motion of a character that is based off animation from the root bone of the skeleton. Most in-game animations are handled via cycles in which the character’s root remains stationary.” which is why I mentioned reparenting everything in maya.

I’m not sure what’s causing this to happen but the children are animating fine. I’d suggest going back to maya and creating a new empty transform to parent everything to and re-export it into unreal.

Ah. I thought that was the problem at first, but I ticked the box and it made no difference. Was I supposed to refresh it somehow or is there a different issue?

I’ve noticed that there is a dropdown called ‘root motion root lock’ directly underneath. it says that the root is locked to ref pose. is that anything to do with it?

I think I’ve made a breakthrough. I found this youtube video: Unreal Engine 4 Good to Know - Add Root Bone to Mixamo Animation - YouTube
I will try it out and let you know if it works. Thanks for all of your help!