So this is rather weird. My project was working perfectly until suddenly the animation update node doesn’t wanna go through my character casting. No errors, nothing just my BP doesn’t work when 5 minutes ago it was working just fine. I could swear I haven’t touched anything special but I guess I did something or my project got bugged. Did this happened to anyone before?

Ok just deleted my saved folder and some things work again but the question is I still see the red flow stuck in at the same place. Before it was working just fine. My Client is not updating the animation data properly now.

By the way I normally have it casting using the initialize only but I used the update in order to see my animations etc… From now it stopped working like that and it won’t let me plug that casting in the Animation Update flow.

Migrated everything to a new project and still the same issue. No idea what’s going on when this casting using the Animation Update was working earlier today like 30 minutes ago and working like that for hours.

From what I gathered it seems that is a normal behavior where the red flow doesn’t go after that? Can anyone confirm that? My problem is that I can’t activate anything in the Animation Preview in order to see my character running, jumping etc… It always brings a yellow text underneath and it says changes won’t be saved. That’s why I went ahead and moved my casting to the update branch and I could then do it but suddenly everything stopped working and I can’t make it work again. So confusing. 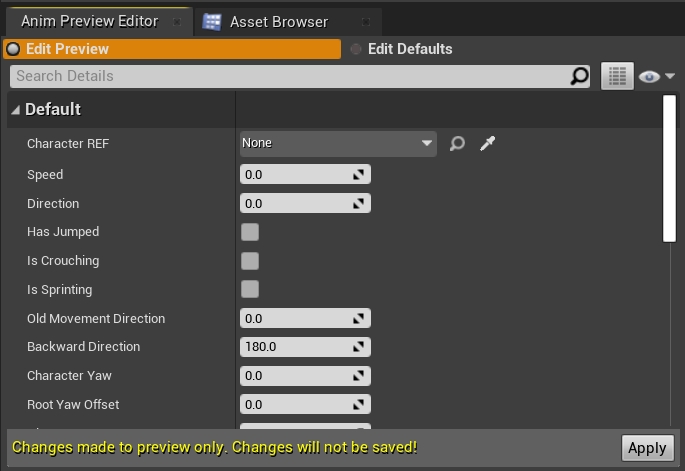 I’ve had issues similar to some of the things you mention here.

Looking at the Event Graph, you may want to get “Try Get Pawn Owner” instead of “Get Player Character” if this animation blueprint can be played on something other than the player.

Also, when it comes to casting during animation preview, there is a good chance that there will not be a valid instance returned because the game is not running.

As for the flow not showing up, I haven’t found a solution to this yet. You mention you deleted your saved folder and some things worked again?

Yes that what I did but this was a long time ago and I don’t even remember. Sorry man.

Why devs cast and set the same obj ref to variable every tick is beyond me.

Yes you are right it’s been a while since I stopped doing that. This post is like 1 year old. Thanks for sharing that I am sure it will help someone at some point.