Hey guys so i had to upgrade to 4.13 because 4.12 had a sequencer bug that halted work no I’ve got an problem with the animtion BP and im wondering if anyone else if having this issue… 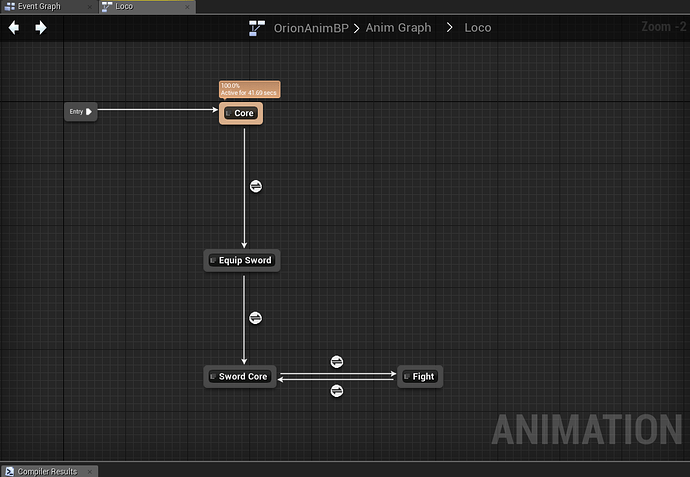 The issue is after playing any animation while in the weapon core blendspace…it repeats the “equip sword” animation state right after the animation is played.

(Below the gif shows my equipping the sword and initiating the attack, but after the attack it done the equip animation is played which isnt initiated by me)

EDIT: after doing some more testing I figured that it happens only with in the Sword blendspace AND using Montages

Things like the sword equip might be better handled in a montage. When using montages are you using and assigning slots as well? The fight part could also probably just use montages. If you are using slots properly and montages then it most probably is a bug then. Just double check you have your setup correct as I have something similar working in 4.13

Animation Montages are a flexible tool that enables you to combine and selectively play animations that are contained in a single asset.

thanks for responding…my setup is properly done, it worked before updating, my setup is comprised of Montages the ONLY thing the state machine handles in transitioning between blendspaces, out of the 2+ years using this engine ive never ran into an issue using this method, I know it well. I combed thru my blueprints for 3 days before posting here to make sure…so I’m pretty sure its a bug its just a pain to work with

I have a feeling it might be reentering the state machine from the root after the montage is finished playing, hence why the sword equip part is played. If you are able to get the state machine up on another monitor or dock it into a part of the editor and see what happens, if it keeps on coming in from the root after the montage is played then you would need to change your setup. There were a few animation changes in the last engine build as far as I remember so your old method may no longer work in 4.13, but what you are trying to achieve should work in one form or another!