I’m trying to animate a spline at runtime in UE4 to create a ‘tether’ type effect between two objects, the tether needs to take into account the position of it’s two end points, which will move, and then animate in a ‘random’ fashion towards the middle. The spline points themselves seem to be animating perfectly fine, the only issue is with the splineMeshComponenet, which does not update properly and has jagged seams which are not visible if I just generate the spline position beforehand.

With Animated Spline Points The spline itself looks correct, it’s just the mesh that has seams and looks jagged.

Without Animated Spline Points This looks much smoother, which is what I’m aiming for

I’m also getting an error message, but I’m not sure if this is linked to the jagged look?

This is the part of the blueprint which updates the spline meshcomponent start, end and tangents, each section of the spline mesh componenent has its previous and next position stored in an array

If I had to guess, I’d say that the tangents are not updating correctly, which is what led me to thinking that the error messages might indicate that the new/previous tangent positions are falling out of scope. But really I’m not sure. I’m also not sure why they would be falling out of scope, despite the fact they seem to be.

At a glance (I might be wrong), are you feeding the spline mesh points in the right order: 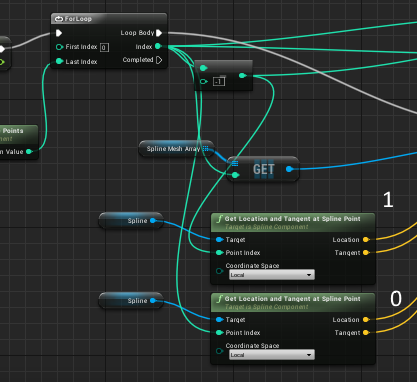 It wasn’t that, but it did solve another mistake I made, so thanks! :rolleyes:

I haven’t really solved the issue, but I have come up with a solution that alleviates the problem visually at least by forcing the tangents to use these values at each point These are my results currently.